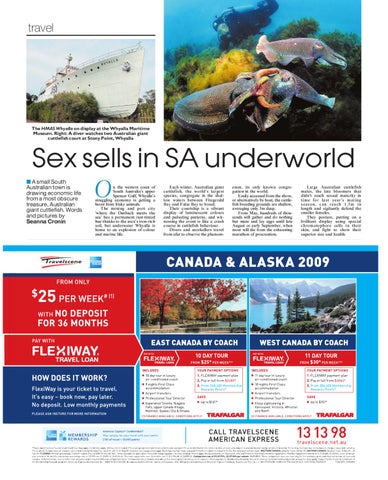 ■ A small South Australian town is drawing economic life from a most obscure treasure, Australian giant cuttlefish. Words and pictures by Seanna Cronin

n the western coast of South Australia’s upper Spencer Gulf, Whyalla’s struggling economy is getting a boost from frisky animals. The mining and port city ‘where the Outback meets the sea’ has a permanent rust-tinted hue thanks to the area’s iron-rich soil, but underwater Whyalla is home to an explosion of colour and marine life.

Each winter, Australian giant cuttlefish, the world’s largest species, congregate in the shallow waters between Fitzgerald Bay and False Bay to breed. Their courtship is a vibrant display of luminescent colours and pulsating patterns, and witnessing the event is like a crash course in cuttlefish behaviour. Divers and snorkellers travel from afar to observe the phenom-

enon, its only known congregation in the world. Easily accessed from the shore, or alternatively by boat, the cuttlefish breeding grounds are shallow, averaging only 3m deep. From May, hundreds of thousands will gather and do nothing but mate and lay eggs until late August or early September, when most will die from the exhausting marathon of procreation.

Large Australian cuttlefish males, the late bloomers that didn’t reach sexual maturity in time for last year’s mating season, can reach 1.5m in length and vigilantly defend the smaller females. They posture, putting on a brilliant display using special chromatophore cells in their skin, and fight to show their superior size and health.

The wooden walkway used by divers to the unique underworld at Stony Point, Whyalla The small males don’t stand a chance in these displays, but they’ve developed a sneaky way to sidestep their competition. They disguise themselves as females, changing their coloration and pulling in their longer tentacles, and when the large males are distracted they slip past undetected and quickly mate with the female. It seems the ladies value the ingenuity of the cross-dressing tactic, mating with small males twice as often as the large. Whyalla’s cuttlefish have been known amongst local divers since the 1970s, but it wasn’t until fishing pressure dramatically increased in the mid 1990s that protection of the natural phenomenon was thrust into the national spotlight. Commercial fishing of cuttlefish, considered a delicacy in Asia, was banned in 1999 and a group of locals is now campaigning to have the breeding grounds permanently protected as a marine park.

The city council is even considering re-naming part of Whyalla’s shoreline ‘Cuttlefish Coast’ and the support couldn’t come at a better time. A deep sea port, which would require dredgi n g , a n d a desalination plant have just been proposed. Both would threaten the cuttlefish population, which is especially vulnerable during the breeding season. Research by the University of Adelaide and the South Australian Museum recently discovered that Whyalla’s cuttlefish is a group genetically distinct from its counterparts in the lower Spencer Gulf, making them even more vulnerable than previously thought. If you are not interested in

A giant cuttelfish guards a female from competitors at the Whyalla breeding grounds. Inset: Eggs of a giant cuttlefish braving the 12C waters, Whyalla also has interesting sights on land. Hummock Hill offers 360-degree views of the marina and city and has an anti-aircraft gun on display, one of four used during WWII. Driving into town, visitors will notice the HMAS Whyalla, which

was dragged 2km from the shore to its current location and restored as part of the maritime museum. It was the first ship built at the Whyalla BHP shipyards in 1941 and a guided tour costs $8 for adults and $4 for children. Tours of the OneSteel Whyalla steelworks and the Iron Knob mine are also available during the week, but make sure to wear covered shoes.

There are also many fishing tours, shooting ranges and 4WD tracks for outdoor enthusiasts. Diving and snorkelling gear can be hired from Whyalla Diving Services, where owner Tony Bramley offers expert advice from his 25 years of local diving experience. For more information on Whyalla and the cuttlefish, visit www.whyalla.com The small town of Whyalla in South Australia is drawing economic life from a most osbscure treasure, Australian giant cuttlefish.

The small town of Whyalla in South Australia is drawing economic life from a most osbscure treasure, Australian giant cuttlefish.