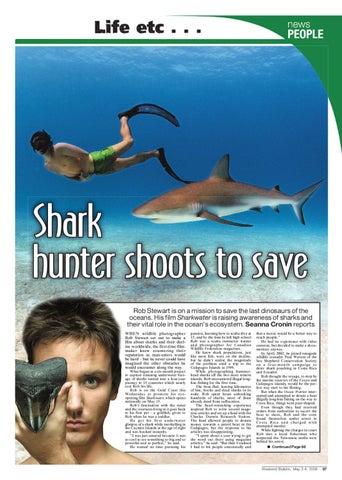 Rob Stewart is on a mission to save the last dinosaurs of the oceans. His film Sharkwater is raising awareness of sharks and their vital role in the ocean’s ecosystem. Seanna Cronin reports WHEN wildlife photographer Rob Stewart set out to make a film about sharks and their decline worldwide, the first-time filmmaker knew countering their reputation as man-eaters would be hard – but he never could have imagined the other obstacles he would encounter along the way. What began as a six-month project to capture stunning underwater footage of sharks turned into a four-year journey to 15 countries which nearly cost Rob his life. Rob is on the Gold Coast this Wednesday to promote his eyeopening film Sharkwater, which opens nationally on May 15. Rob’s fascination with the water and the creatures living in it goes back to his first pet – a goldfish, given to Rob when he was a toddler. He got his first underwater glimpse of a shark while snorkelling in the Caymen Islands at the age of eight and was hooked instantly. ‘‘I was just amazed because it was so cool to see something so big and so powerful and so perfect,’’ he said. He wasted no time pursuing his

passion, learning how to scuba dive at 13, and by the time he left high school Rob was a scuba instructor trainer and photographer for Canadian Wildlife Federation magazines. He knew shark populations, just like most fish, were on the decline, but he didn’t realise the magnitude of the problem until a trip to the Galapagos Islands in 1999. While photographing hammerhead sharks off the two most remote islands, Rob encountered illegal longline fishing for the first time. The boat fled, leaving kilometres of line, hooks and dead sharks in its wake. Rob spent hours unhooking hundreds of sharks, most of them already dead from suffocation. The heart-wrenching experience inspired Rob to write several magazine articles and set up a fund with the Charles Darwin Research Station. The fund allowed people to donate money towards a patrol boat in the Galapagos, but the response to his articles was disappointing. ‘‘I spent about a year trying to get the word out there using magazine articles,’’ he said. ‘‘But then I realised I had to hit people emotionally and

that a movie would be a better way to reach people.’’ He had no experience with video cameras, but decided to make a documentary anyway. In April, 2002, he joined renegade wildlife crusader Paul Watson of the Sea Shepherd Conservation Society on a four-month campaign to deter shark poaching in Costa Rica and Ecuador. Rob thought the voyage, to stop by the marine reserves of the Cocos and Galapagos islands, would be the perfect way start to his filming. But when the Ocean Warrior intercepted and attempted to detain a boat illegally long-line fishing on the way to Costa Rica, things went pear-shaped. Even though they had received orders from authorities to escort the boat to shore, Rob and the crew found themselves under arrest in Cos t a Ri ca and charged wi t h attempted murder. While fighting the charges in court Rob met a local fisherman who suspected the Taiwanese mafia were behind his arrest. ● Continued Page 88

● From Page 87 He went to investigate the mafia’s private docks and briefly filmed footage of millions of dollars worth of shark fins drying on the roofs. He had just discovered and documented a massive illegal shark fin trade between Costa Rica and Asia, fuelled by Asia’s growing markets where .45kg of fin can fetch $300 or more. The news of Rob’s espionage quickly spread and the Ocean Warrior crew got word the Costa Rican authorities planned to detain them indefinitely. As a boatful of men armed with machine guns headed their way, Rob and Paul fled to international waters to continue their campaign in the Galapagos. But Rob and the Ocean Warrior crew arrived in the Galapagos only to discover fishermen lobbying hard for the legalisation of long-lining in one of the last true sanctuaries for sharks. To make matters worse, a pain in Rob’s hip forced him to go to the local hospital where he was diagnosed with flesh-eating disease. Sidelined with a disease that could cost him his leg and possibly his life, Rob watched helplessly as the infection crept up his inner leg. Paul Watson and the Ocean Warrior set off to campaign against whaling and Rob was left alone in hospital, pondering how to save his film. He had already spent his entire budget and had yet to film any sharks underwater. ‘‘I had come to shoot an underwater documentary and instead shot all this human drama,’’ he said. ‘‘I hadn’t made the movie I wanted to make yet, so it would have been crazy to give up at that point.’’ Luckily, after a week in hospital the infection cleared up and Rob snuck back into Costa Rica in the hope of finally reaching Cocos Island. But he was surprised to discover he and Sea Shepherd’s legal dramas had acted like a spotlight on the growing unrest about the Taiwanese mafia’s abuse of Costa Rican waters. After filming the protests in Costa Rica and still feeling quite ill, Rob returned to Canada to gain some perspective on his four-month adventure. He was soon diagnosed with dengue fever, West Nile virus and tuberculosis. During his recovery, Rob identified the missing pieces to his now massive project. The film had evolved into a much larger statement about how the fate of sharks was linked with the fate of humanity. ‘‘Sharks had been the ocean’s top predators for 450 million years and in just 30 years they had become prey,’’ he said. Rob knew few people realised the obliteration of sharks would jeopardise the balance of every animal below them in the food chain, including the phytoplankton that provide 70 per cent of the oxygen people breathe. He spent another four years gathering underwater footage, travelling to Asia to find out more about shark fin soup and interviewing shark experts – the final result is Sharkwater.

Rob Stewart gets up close with the sharks during filming. Above left: Rob recovering in hospital from the flesh eating disease and (right) the Ocean Warrior attempting to stop illegal fishing off Guatemala The film has a lot of Australian footage, which Rob shot over a year living Down Under. He is keen to catch up with some of his Aussie mates, but is also concerned about what is happening in Australian waters. ‘‘I don’t think the shark nets and

drumlines are a very good idea,’’ he said. ‘‘I do understand now that they’re in place they would be very difficult to remove, but the general reasoning behind them is just ludicrous.’’ The timing of Sharkwater’s premier is also relevant for the shark

finning going on in Queensland’s waters. The state’s East Coast Inshore Fin Fish Fishery, which targets whaler and hammerhead sharks for their fins, is under review. ‘‘I understand the need for fishermen to make profits and for people

to eat, but shark finning wastes 90 per cent of the animal,’’ he said. ‘‘We waste 54 billion pound (24 billion kilograms) of fish each year while 8 million people starve.’’ Shark experts estimate 100 million sharks, regardless of size or species, are killed annually for their fins. Even gentle plankton-eating whale sharks are being killed for their large fins, which can retail in Asia for $14,000 each. ‘‘A lot of young people in Asia are turning away from shark fin soup, so things are going in a positive direction,’’ he said. ‘‘It’s largely an awareness issue, which I think is the biggest challenge facing the oceans.’’ Rob said he was blown away by the response to his film, which debuted at the Toronto International Film Festival and has won more than 20 international awards. A woman in New York was so inspired by the film she quit her job and founded Shark Savers conservation group and a 15-year-old girl in Canada has raised more than $20,000, and counting, for shark conservation. ‘‘It’s super inspiring and the only reason the film broke box office records in Canada was because of kids,’’ he said. ‘‘Kids came out to theatres in droves because to them it feels inherently right to save the last dinosaurs of the oceans.’’ In response to the film’s surprising popularity with kids, Rob plans to create a series of children’s books and an animated series. He already has 500 hours of marine footage, a large collection of photographs, shark statistics and supporters at his disposal. ‘‘I want to make conservation cool and accessible to everybody,’’ he said. Perhaps the person most affected by the film is Rob himself. The experience has inspired Rob to become a full-time conservation campaigner and film-maker. ‘‘When I started out making the movie I thought I’d be in it for three to six months max and then return to photography,’’ he said. ‘‘But the experience forced me to become a film-maker and made me aware of the power of film to make a difference.’’ Rob said he plans to keep making films about conservation and sustainability. ‘‘We’re in a time right now where our survival as a species is in jeopardy,’’ he said. ‘‘I truly believe we could have a revolution if everyone knew how we’re destroying the planet.’’ Shark Finning ● Shark finning involves the removal of a shark’s fins and discarding of the body, which is often still alive, back into the ocean. ● Any shark is taken, regardless of age, species or size. ● Shark fins are consumed almost exclusively in Asia, where they are used for texture in soup and for traditional medicine. ● Shark finning is widespread and largely unmanaged and unmonitored. ● The practice is unsustainable because sharks are being harvested much faster than they can reproduce.

There’s another way to get to Uni. For information and application forms visit www.scu.edu.au/preparingforsuccess and for additional assistance call 02 6620 3386. 88 - Weekend Bulletin, May 3-4, 2008

Southern Cross University’s Preparing for Success Program offers you an alternative entry path. This special FREE program is available on campus at Lismore, Coffs Harbour and Tweed Heads or by distance education. Best of all, successful completion of the program can gain you a place at Southern Cross University! Preparing for Success provides you with the skills you need to succeed at Uni and covers: • How to get the most out of lectures and tutorials • Academic study skills • Choice of preparatory units in Business, Science or Arts • How to write essays and reports • Library research • Computer literacy