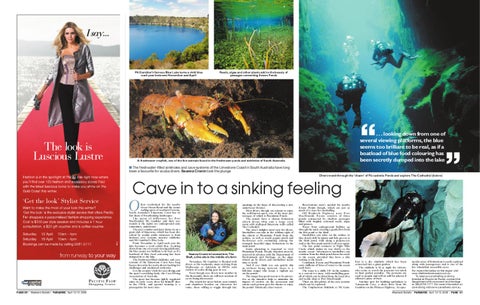 Reeds, algae and other plants add to the beauty of passages connecting Ewens Ponds

. . . looking down from one of several viewing platforms, the blue seems too brilliant to be real, as if a boatload of blue food colouring has been secretly dumped into the lake

A freshwater crayfish, one of the few animals found in the freshwater ponds and sinkholes of South Australia

■ The freshwater-filled sinkholes and cave systems of the Limestone Coast in South Australia have long been a favourite for scuba divers. Seanna Cronin took the plunge Divers wend through the ‘chasm’ of Piccaninnie Ponds and explore The Cathedral (below)

Cave in to a sinking feeling O

ften overlooked for the nearby Great Ocean Road and the scenic surfing spots of southern Victoria, South Australia’s Limestone Coast has its fair share of breathtaking landscapes. The point of difference for Port MacDonald, Mt Gambier and their surrounds is the sights are underground and, sometimes, underwater. The area’s timber and dairy farms sit on a giant slab of limestone, which has been dissolved by weakly acidic rainwater to form intricate cave systems, massive sinkholes and Mt Gambier’s Blue Lake. From November to April each year the lake becomes a vivid cobalt blue. Looking down from one of several viewing platforms, the blue seems too brilliant to be real, as if a boatload of blue food colouring has been dumped in to the lake. The freshwater-filled sinkholes and cave systems of the Limestone Coast have long been a favourite for scuba divers looking for challenges and uncharted territories. It is the country’s hub for cave diving and the sport’s certifying body, the Cave Diving Association of Australia. The sport has become tightly regulated since its early ‘every diver for himself’ days in the 1960s, and special training is a prerequisite for most sites. PAGE 20 - Weekend Bulletin PARADISE, April 12-13, 2008

Seanna Cronin is lowered into The Shaft, a dive site in the middle of a farm Nowadays, Mt Gambier is flooded with divers at the weekends, many arriving from Melbourne or Adelaide in 4WDs with trailers of scuba diving gear in tow. Even though cave divers now number in the thousands, there are still new sections of caves being discovered. The search for never before seen tunnels and chambers borders on obsession for some, those willing to wiggle through tiny

openings in the hope of discovering a new underwater frontier. Most divers, though, are content to enjoy the well-known spots, one of the most picturesque of which is Picaninnie Ponds. The ponds have a chasm formation which drops 60m and a large rock room with scalloped limestone walls called The Cathedral. The area’s delights aren’t just for divers. Snorkellers can take in the sublime sight of the chasm at Picaninnie Ponds from the surface, as well as watch pygmy perch and freshwater eels swimming among the strangely beautiful algae formations in the main pond. Some planning is required to visit Picaninnie Ponds. Hourly timeslots must be reserved in advance with the Department of Environment and Heritage, as the algae stirred up by divers and snorkellers needs time to settle. And if you think you can quietly slip in without being noticed, there is a full-time ranger who keeps a vigilant eye on the ponds. The ranger has good reason to be protective as the timeslots help to minimise the impact of tourists on the ecosystem and ensure each person gets the chance to enjoy the ponds’ fabulously clear waters.

Reservations aren’t needed for nearby Ewens Ponds though, which are just as much of a treat for snorkelling. Off R id d o ch H igh way n ear Po r t MacDonald, Ewens consists of three ponds connected by shallow passages filled with brightly coloured reeds, algae and grasses. Water from underground bubbles up through the sand, creating a gentle flow from the first pond to the third. Snorkellers can relax on the surface as they slowly drift by plants and fish, get out at the third pond, walk along a purpose-cut trail to the first pond and do it all over again. The last pond connects to Eight Mile Creek, which makes its way slowly to the nearby ocean. Adventurous snorkellers can continue from the third pond down the creek to the ocean, provided they have a ride waiting at the beach. Combined, Ewens and Picaninnie Ponds carry millions of litres of water to the ocean each hour. The water is a chilly 15C in the summer, so a wetsuit is a must, with snorkelling gear, all of which can be hired from the local dive and tackle shop at Port MacDonald. There are also plenty of dry cave systems which can be explored. The Umpherston Sinkhole at Mt Gam-

bier is a dry sinkhole which has been converted into a giant garden. The sinkhole is lit at night for visitors, who come to watch the possums run amok in their garden paradise. The possums are used to people and will sit still for photos if offered a piece of fruit. Another spot for budding spelunkers is Tantanoola Cave, a short drive from Mt Gambier on the Princess Highway. Its spec-

tacular array of formations is easily explored along wide passageways and is one of the few wheelchair accessible caves. For more information on the region visit www.thelimestonecoast.com.au To reserve a snorkelling or diving timeslot at Picaninnie Ponds, contact the Department of Environment and Heritage on (08) 8735 1177. For more information on cave diving visit www.cavedivers.com.au Cave into that Sinking Feeling

Cave into that Sinking Feeling