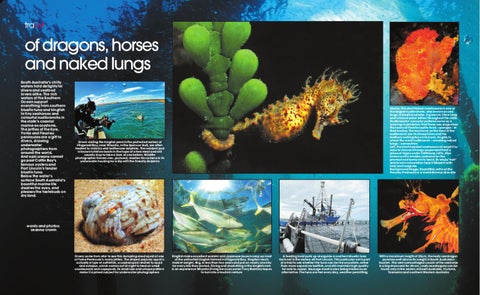 of dragons, horses and naked lungs South Australia’s chilly waters hold delights for divers and seafood lovers alike. The rich waters of the Southern Ocean support everything from southern bluefin tuna and kingfish to tiny seahorses and colourful nudibranchs in the state’s coastal marine ecosystems. The jetties of the Eyre, Yorke and Fleurieu peninsulas are a gift to divers, drawing underwater photographers from around the world. And epicureans cannot go past Coffin Bay’s famous oysters and Port Lincoln’s tender bluefin tuna. Below the water’s surface South Australia’s bountiful marine life dazzles the eyes, and pleases the tastebuds on dry land.

Above, this short-tailed ceratosoma is one of the largest nudibranchs, also known as sea slugs, in South Australia. It grows to 15cm long and is found under jetties throughout the state. Nudibranchs’ colourful patterns serve as a warning to predators that these sea slugs store the toxins of their favourite food – sponges – in their bodies. The two horns on the front of the nudibranch are its rhinophores and the feathery looking fan on its back, its gills, is where the word nudibranch – meaning naked lungs – comes from Left, the short-headed seahorse is so small it is easy to miss as it hangs suspended from a piece of algae under Edithburg Jetty. Also known as the knobby seahorse for the pronounced bump on its head, its wispy ‘hair’ and brown colouration help it blend in with kelp and seagrass Background image, Rapid Bay Jetty on the Fleurieu Peninsula is a world-famous dive site

Divers visiting the kingfish pens in the protected waters of Fitzgerald Bay, near Whyalla, in the Spencer Gulf, are often treated to visits by wild bottlenose dolphins. The resident pod is known to follow boats in the hope of a free meal and will usually stop to take a look at snorkellers. Wildlife photographer Darren Jew, pictured, readies his camera in its underwater housing for a dip with the friendly dolphins

Divers come from afar to see this dumpling-sized squid at one of Yorke Peninsula’s many jetties. The striped pajama squid is actually a type of cuttlefish, a cephalopod related to squid and octopus, which comes out at night to feed on small crustaceans and copepods. Its small size and unique pattern make it a prized subject for underwater photographers 18

Kingfish make excellent sashimi and Japanese buyers snap up most of the yellowtail kingfish farmed in Fitzgerald Bay. Kingfish reach market weight, 4kg, in less than two years and put on nearly one kilo for every kilo they are fed. Diving and snorkelling in the kingfish nets is an experience Whyalla Diving Services owner Tony Bramley hopes to turn into a tourism venture

A feeding boat pulls up alongside a southern bluefin tuna farm net in the waters off Port Lincoln. This particular net is part of a trial to see whether the tuna can be fed on pellets, rather than more expensive baitfish, and still maintain high quality for sale to Japan. Sausage meat is also being trialed as an alternative. The tuna are fed every day, weather permitting

With a maximum length of 35cm, the leafy seadragon punches well above its weight in South Australian tourism. This well-camouflaged cousin of the seahorse is a big drawcard for divers. Leafy seadragons can be found only in the waters of South Australia, Victoria, Tasmania and southern Western Australia paradise magazine 19 Of Dragons, Horses and Naked Lungs

Of Dragons, Horses and Naked Lungs