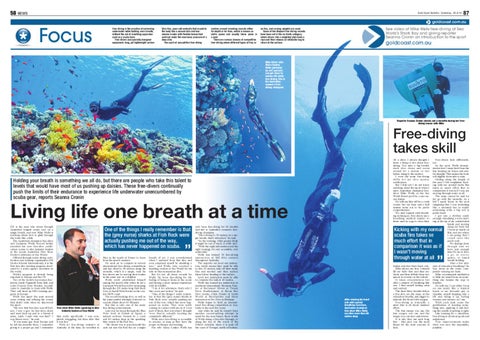 Free-diving is the practice of swimming underwater while holding one’s breath, without the aid of breathing apparatus such as a scuba tank. Free-divers use specially designed equipment: long, yet lightweight carbon-

fibre fins, open-cell wetsuits that mould to the body like a second skin and lowvolume masks with flexible lenses that contract under the enormous pressure of a deep dive. The sport of competitive free-diving

centres around breaking records either for depth or for time, which is known as static apnea and usually takes place in a pool. There are various classes of competitive free-diving where different types of fins, or

no fins, and varying weights are used. Some of the deepest free-diving records have been set in the no-limits category, where divers ride a weighted sled down a rope and then release an inflatable bag to return to the surface.

Free-diving takes skill AS a diver, I always thought I knew a thing or two about freediving. You take a big breath, duck dive down and swim around for a minute or two before rising to the surface. I even did some free-diving skills for my dive master certification. But I find out I do not know anything about the sport when I meet Australian champion freediver Mike Wells at the Sea World Resort pool for a one-onone lesson. He tells me this will be a crash course, but my hour and a half session turns out to be pretty comprehensive. We start topside with breathing techniques. Free-divers use a breathing method similar to those used in yoga to relax their

Holding your breath is something we all do, but there are people who take this talent to levels that would have most of us pushing up daisies. These free-divers continually push the limits of their endurance to experience life underwater unencumbered by scuba gear, reports Seanna Cronin

Living life one breath at a time HE is the man who swam through Australia’s longest ocean cave on a single breath, and now Mike Wells is teaching others how to glide through the water like a fish. The Australian champion free-diver and Guinness World Record holder unveiled his new free-dive certification course to dive industry leaders at the recent Australian Dive Store Dealer Conference at Sea World. Offered through scuba diving certification and training organisation SSI (Scuba Schools International), it is the first free-dive training program developed by a scuba agency anywhere in the world. Wells’s program is already being exported to Europe and the US. Two of the world’s top women freedivers, Linda Paganelli from Italy and Lotta Ericson from Sweden, recently came to Australia to train with Wells. They will head up SSI’s training program in Europe. Wells has spent the past several years writing and refining the course that didn’t exist when he discovered the sport. ‘‘My very first free-dive was off Sydney. I saw a guy, he free-dove down and went back up and to a friend of mine, Andy, I said ‘who was that?’, I was blown away,’’ he said. ‘‘It was some guy from Europe and he left his monofin there. I remember giving it a proper go and I remember

One of the things I really remember is that the (grey nurse) sharks at Fish Rock were actually pushing me out of the way, which has never happened on scuba.

Free-diver Mike Wells speaking to dive industry leaders at Sea World that really specifically. I was completely struggling, but then after that it was fun.’’ With no free-diving industry in Australia at the time, he travelled to

Nice in the south of France to learn from the sport’s masters. He went on to compete in several international free-diving competitions and has dived to 80 metres using his monofin, which is a single, wide fin free-divers use by moving their bodies in the same way as a dolphin. Wells really established himself among the sport’s elite when he set a Guinness World Record for swimming through the 120 metre-long Fish Rock Cave at South West Rocks on the central NSW coast. His record-breaking dive, as well as his unsuccessful attempts, featured on current affairs show 60 Minutes. But that is only one of his many free-diving achievements. Last year he swam through the Blue Hole Arch at Dahab in Egypt, a natural archway formed by a coral reef 60 metres deep in the sparkling blue waters of the Red Sea. ‘‘My dream was to pass beneath the arch out into the Red Sea on a single

breath of air. I was overwhelmed when I surfaced from this dive and even surprised myself by shedding a tear,’’ said Wells, who received a standing ovation at Sea World for his talk on this momentous dive. But it’s not all about records for Wells. He loves free-diving for the feeling of being at home in the ocean and having a more natural experience with its wildlife. ‘‘I do it for adventure, that’s why I like caves and arches,’’ he said. ‘‘One of the things I really remember is that the (grey nurse) sharks at Fish Rock were actually pushing me out of the way, which has never happened on scuba. They were really coming in contact with me as if I was part of them, that was when I thought ‘wow they’re actually treating me completely different’.’’ Wells says free-diving is accessible to anyone, as long as they have the proper technique and training. His wife Alana Caskey Wells has

only been free-diving for 18 months and she is Australia’s women’s freediving champion. ‘‘She’s diving to 50 metres on a single breath, that’s ridiculous,’’ he said. ‘‘So the training, while people think it might be out of reach, it really isn’t. ‘‘With the right information and the right training, it’s very accessible, very achievable.’’ Wells has trained 30 free-diving instructors at SSI dive centres throughout Australia. The majority are level one instructors, which means they must be able to dive 20 metres, take off their mask, fins and snorkel and then replace them before heading to the surface. Level two instructors must be able to complete the task at 40 metres. Wells has trained six instructors in southeast Queensland: Shannon Hunter at Buccaneer Divers at Tweed, Perry Bartholomew at Byron Bay Dive Centre, Chris Heider at Scuba World at Mooloolaba and three instructors at Pro Dive in Brisbane. Wells hopes to hold an international free-diving competition in Australia in the next few years. And while he said he doesn’t have another record-setting attempt in mind for the near future, there is talk of Wells doing a free-dive through, or along the top of, the wreck of the HMAS Adelaide when it is sunk off the coast of Terrigal, north of Sydney.

Free-divers kick differently, too. In the pool, Wells demonstrates how I must kick from the hip, keeping my knees and ankles straight. This makes the body roll slightly from side to side. Gliding along the length of the pool I felt weightless. Kicking with my normal scuba fins takes so much effort that in comparison it was as if I was not moving through water at all. The same cannot be said for my go with the monofin. As a kid I spent hours in the pool imagining that I was swimming like a mermaid but in reality swimming with a big tail is pretty hard. I get into a rhythm easily enough, visualising a wave starting at the tip of my outstretched hands and moving along my body but I focus so much on this, and not where I am going, that I crash into the pool’s wall. No damage done though and we have just enough time for me to have a go at static apnea, or timed breath-holding. After a few minutes of relaxation breathing I lie face down in the water, completely relaxing my body. Mike recommends meditation to help my mind focus on something else besides the urge to breathe. He tells me I can either focus on one point, like a tropical beach or my favourite pet, or visualise myself stepping into a lift and riding it up, feeling warmer and warmer as I rise. With each task came the gratification of learning something new, applying it and feeling the results of getting it right. Like training for a marathon, free-diving is all about goals and milestones. Tiny improvements make what was once the impossible, possible.

bodies and slow their heart rate. Mike shows me how I should fill my belly first and then my chest, and then deflate these two spaces in reverse on the exhale. It takes concentration but after a minute of breathing this way I find myself feeling calm and centred. The final three breaths before a free-dive are the same as the relaxation breaths, just bigger to saturate the blood with oxygen. Free-diving is, ironically, a sport that is all about minimal effort. The less energy you use, the less oxygen you use and the longer you can stay underwater. It is why they use such long fins – they give you the most thrust for the least amount of kick. Living Life One Breath at a Time

Holding your breath is something we all do, but there are people who take this talent to levels that would have most of us pushing up daisie...

Living Life One Breath at a Time

Holding your breath is something we all do, but there are people who take this talent to levels that would have most of us pushing up daisie...