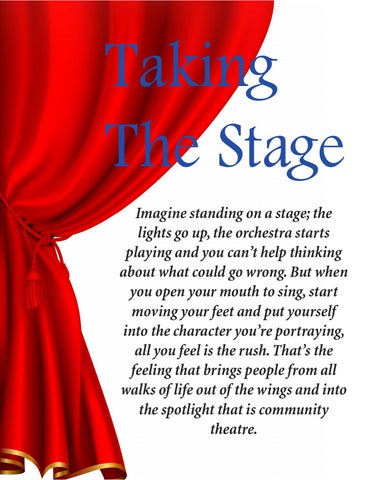 Taking The Stage Imagine standing on a stage; the lights go up, the orchestra starts playing and you canâ&#x20AC;&#x2122;t help thinking about what could go wrong. But when you open your mouth to sing, start moving your feet and put yourself into the character youâ&#x20AC;&#x2122;re portraying, all you feel is the rush. Thatâ&#x20AC;&#x2122;s the feeling that brings people from all walks of life out of the wings and into the spotlight that is community theatre.

“A moment of performance,” says the Canadian Encyclopaedia of theatre. “A moment which exists in the art of creation and then disappears.” Stories, music and movement are brought to life in front of an audience. But show time is merely the culmination of months of putting a production together. Long before the curtain rises, there are those who are drawn into devoting their time and energy into making sure the show goes on. And there’s more to their attraction than the smell of the greasepaint and the roar of the crowd. Leslie McCurdy is a Windsor-based actor who has been performing in a multitude of productions for the past 18 years. McCurdy started out as a dancer when she was in college, but eventually took on acting because it allowed her more introspection and expression. “It allows me to explore different aspects of my personality and my reality and bring some of my person to other characters,” says McCurdy. “In some ways it’s almost therapeutic, how you can sometimes work through aspects of your life through your characters.” McCurdy finds that theatre provides lessons on the human condition as well. “Theatre also gives us a chance to deepen our understanding through one another. Through the stories that can be told through theatre, we understand that we are more alike than we are different in our humanity.” McCurdy loves performing in theatre productions, including her own one-woman shows, because it allows her to communicate ideas to the audience. She gets to spread new ideas and sometimes change the thinking of other people. “I sort of think of myself as Johnny Appleseed (because) theatre allows me the form through which to spread those seeds,” says McCurdy. Story by Sean Previl Photos by Sean Previl and Ruthmary Weiler

The cast warms up before rehearsal for A.C.T.’s West Side Story

In Windsor and Essex County, there are many ways and places to participate in the theatre arts and pass along ideas. From established companies such as Windsor Light Music Theatre to Korda Artistic Productions or the newly formed Arts Collective Theatre, each brings its own style of production and gives everyone in the community a chance to contribute. From direction style to material selection, the region’s theatre community offers a diverse range of opportunities for actors to practice their craft. Taking part in the dramatic arts has multiple benefits in addition to exploring your personality or spreading ideas. From emotional and physical benefits to teamwork and social skills, drama can positively impact children and adults at every stage of life. Theatre can help people develop more self-confidence through performing onstage, solve problems

quicker through improvisation and improve memory through “rehearsing and performing words, movements and cues.” McCurdy says the best part about theatre is you’re always working with other people, which offers a community atmosphere. “Theatre can be a comfortable place to learn to do that (speak in front of people)...there’s a lot of trust in the work you do in theatre and there’s a lot of support for people who are really working to try and stretch outside of themselves,” says McCurdy. McCurdy says it can also give people a sense of commitment because joining a theatre production takes a lot of work and a lot of time. “A cast is a team, it’s a family and if you’re missing and not doing your part, you’re letting everyone else down,” says

How to audition Ready to take the plunge and give community theatre a try? Keep your eye on these local production companies for news about upcoming shows and audition calls.

u Read audition calls carefully so you

know what will be expected of you at the audition. u Check rehearsal and performance schedules before auditioning so you know if you can make the commitment. u If cast, be prepared to also work on sets, costuming, makeup, etc. In community theatre, it’s usually all hands on deck! u Don’t be afraid to ask questions.

McCurdy. “At the same time, no one would let you let them down because everybody’s lifting each other up.” There’s plenty of ways to get involved with theatre in Windsor and Essex County with multiple production companies across the region. In the past year, approximately 13 shows have been performed and at least another 15 shows will be opening in the next year. While some of these shows have closed their auditions, such as Windsor Light’s Mary Poppins and Theatre Ensemble’s Shrek, other auditions will be held in the near future for shows like Grease and Bring It On. For upcoming audition dates, you can check the production company websites listed in our sidebar, and bookmark them for future reference. For some people, like Chris Rabideau, theatre can also be therapeutic. “Theatre for me was a medicine, it was something I got addicted to, like a drug,” says Rabideau, artistic director of A.C.T. in Windsor. “I think theatre is very important for a lot of youth because it allows us to make a choice...when we choose theatre we choose discipline and it really can change us. It can make us into who we are and can help us see what it’s like to walk in other people’s shoes.”

Whether it’s a dramatic production, improv sketch, musical theatre or a Shakespearean play, when an actor gets onstage they’re portraying a character. That’s what Rabideau enjoys most about theatre. “Theatre is an escape,” says Rabideau. “The great thing about theatre is that you’re stepping into someone else, it’s not you. It’s amazing...I see (people) who aren’t brave enough to do it in real life but when they’re a character they can do something.” McCurdy often tells actors she works with to research their characters and find out what they can about them so they’ll become the character fully and not just rely on a costume or the lines they’re reading. Creating a character is about delving deep into an actor’s own emotions to bring out someone new. “When you’re talking about trying to create the lives of other people, you really have to go inside and look at your own life and expose emotional places and realities through other characters,” says McCurdy. Portraying a character, McCurdy says, can also be beneficial to actors because of what you can bring back to your own self. “There’s always something from that character that

Try something that scares you, because it’s worth it becomes a part of who I am residually,” says McCurdy. With all these benefits, it’s unfortunate that there’s still only a small number of people who take the stage. Only four per cent of all Ontarians rehearsed or performed in a play or musical in front of an audience at least once a year in 2011. Only one per cent was found to do the same at least once a month or once a week. Rabideau says those who rarely, or never, take part in the theatre arts should try something that scares them because it’s worth it. Rabideau and A.C.T. are taking on West Side Story for their first production, which he claims is one of the toughest musicals because of the number of characters, choreography and vocal ranges needed. He chose the musical because of the fact it scares him. “I live on the thrill of the fear of what may happen, what could happen,” says Rabideau. Having directed around eight major productions along with several smaller projects, Rabideau says he loves seeing performers changing over the course of the production. “I hope they’ve learned something on their journey,” says

Behind the Ging Gingerbread gerbrread ead

Rabideau. “It’s different for everyone. One person will be like, ‘I never knew I could do that with makeup,” or maybe someone else will say, ‘Wow, that breathing exercise really helped me with my voice.’” Rabideau also says he’s shared amazing moments with several actors who he’s worked with. “The moments where you may have had a preconceived notion of what you think someone can do and then they surprise you (or) the moments where you have in your head, ‘Oh I really have to plan this out,’ and then you go and they understood it,” says Rabideau. He’s also been suprised by the initiative shown by new actors, and debuts that defied expectations. Theatre is a rigourous endeavour, way outside many people’s comfort zones. But the reward of a standing ovation at the end of that final curtain call can be the most exhilarating feeling there is, along with knowing you put on a great show. Theatre can give you much more than what it asks of you; consider taking a chance and taking the stage. 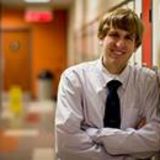 Why take part in theatre?

Why take part in theatre?