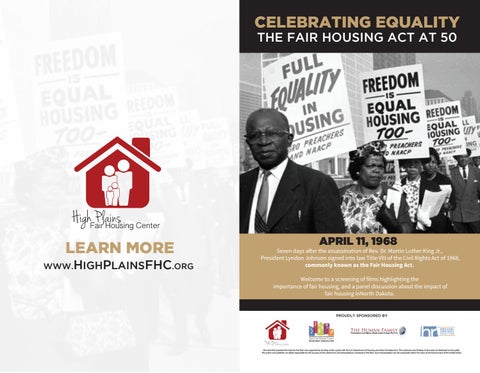 APRIL 11, 1968 Seven days after the assassination of Rev. Dr. Martin Luther King Jr., President Lyndon Johnson signed into law Title VIII of the Civil Rights Act of 1968, commonly known as the Fair Housing Act. Welcome to a screening of films highlighting the importance of fair housing, and a panel discussion about the impact of fair housing inNorth Dakota.

The work that provided the basis for this flyer was supported by funding under a grant with the U.S. Department of Housing and Urban Development. The substance and findings of the work are dedicated to the public. The author and publisher are solely responsible for the accuracy of the statements and interpretations contained in this flyer. Such interpretations do not necessarily reflect the views of the Government of the United States.

In April of 1968, seven days changed fair housing forever. An important story about Martin Luther King Jr. and one of the most important civil rights struggles in our nation's history.

“A Matter of Place” shines a bright light on housing discrimination, one of the most shrouded and misunderstood civil rights issues in America. The documentary connects past struggles for fair housing to contemporary incidents of housing bias based on race, sexual orientation, disability, and source of income. The film depicts three stories of people who faced housing discrimination in present-day New York City. They poignantly describe the injuries inflicted on them during these incidents, as well as their resolve to fight for justice. Through experts, civil rights advocates, and fair housing testers, the film also recounts our nation's often overlooked history of residential segregation and introduces viewers to systemic and pervasive injustices that, despite the existence of fair housing laws, continue to inflict harm on entire communities and individuals throughout America.

6:40 Clips from Brick by Brick: A Civil Rights Story

“Brick by Brick” shows how public policies isolated poor people of color, even as they lived in the center of their city, in segregated neighborhoods, served by failing schools. The primary storytellers are local citizens from diverse backgrounds, who relate their personal encounters with discrimination, even as others experience opportunity across town.

A brief intermission prior to our panel discussion.

A distinguished list of panelist, moderated by Aruna Seth, will discuss the importance of the Fair Housing Act and the impact and continued need of the Act in North Dakota. A question and answer session will take place at the conclusion of the discussion.

DAVID KLEIN Executive Director, stutsman county housing authority The Stutsman County Housing Authority oversees both public housing and voucher programs, if available. The housing authority owns and manages facilities which across the city. The staff's goals include providing affordable housing in secure environments, while providing a high level of service.

MICHELLE RYDZ Executive director, high plains fair housing center Michelle is the Founder and Executive Director at High Plains Fair Housing Center, and one of the founding members of North Dakota United Against Hate. Michelle studied fair housing law, testing practices, and the complaint process at the John Marshall Fair Housing Legal Support Center in Chicago and studied with the National Fair Housing Alliance. She advocates for victims of housing discrimination in North Dakota. Michelle began her career as a community organizer in Chicago and later worked with the National Democratic Institute on developing advocacy projects in Romania after the fall of communism. ROYCE SCHULTZE Executive director, Dakota center for independent living Royce is the Executive Director of the Dakota Center For Independent Living. Royce’s passion is to push for an accessible community by advocating for visitable homes and accessible businesses in the Bismarck and surrounding area. Royce currently serves on the North Dakota Statewide for Independent Living Council, North Dakota Olmstead Commission, and Good Shepherd Lutheran Church Council. VICKI SLAVIK North Dakota department of labor and human rights The North Dakota Department of Labor and Human Rights is responsible for enforcing North Dakota labor and human rights laws and for educating the public about these laws. In addition, the department licenses employment agencies operating in the state and can verify the status of independent contractor relationships. We are here to be of assistance to all North Dakota citizens, employees, employers, those purchasing or receiving services, and those providing services. Program for the film & panel discussion celebrating the 50th Anniversary of the Fair Housing Act.

Program for the film & panel discussion celebrating the 50th Anniversary of the Fair Housing Act.