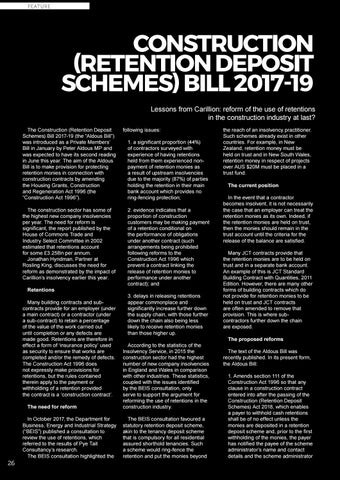 CONSTRUCTION (RETENTION DEPOSIT SCHEMES) BILL 2017-19 Lessons from Carillion: reform of the use of retentions in the construction industry at last? The Construction (Retention Deposit Schemes) Bill 2017-19 (the “Aldous Bill”) was introduced as a Private Members’ Bill in January by Peter Aldous MP and was expected to have its second reading in June this year. The aim of the Aldous Bill is to make provision for protecting retention monies in connection with construction contracts by amending the Housing Grants, Construction and Regeneration Act 1996 (the “Construction Act 1996”). The construction sector has some of the highest new company insolvencies per year. The need for reform is significant, the report published by the House of Commons Trade and Industry Select Committee in 2002 estimated that retentions account for some £3.25Bn per annum. Jonathan Hyndman, Partner at Rosling King, discusses the need for reform as demonstrated by the impact of Carillion’s insolvency earlier this year. Retentions Many building contracts and subcontracts provide for an employer (under a main contract) or a contractor (under a sub-contract) to retain a percentage of the value of the work carried out until completion or any defects are made good. Retentions are therefore in effect a form of ‘insurance policy’ used as security to ensure that works are completed and/or the remedy of defects. The Construction Act 1996 does not expressly make provisions for retentions, but the rules contained therein apply to the payment or withholding of a retention provided the contract is a ‘construction contract’. The need for reform In October 2017, the Department for Business, Energy and Industrial Strategy (“BEIS”) published a consultation to review the use of retentions, which referred to the results of Pye Tait Consultancy’s research. The BEIS consultation highlighted the

following issues: 1. a significant proportion (44%) of contractors surveyed with experience of having retentions held from them experienced nonpayment of retention monies as a result of upstream insolvencies due to the majority (87%) of parties holding the retention in their main bank account which provides no ring-fencing protection; 2. evidence indicates that a proportion of construction customers may be making payment of a retention conditional on the performance of obligations under another contract (such arrangements being prohibited following reforms to the Construction Act 1996 which prevent a contract linking the release of retention monies to performance under another contract); and 3. delays in releasing retentions appear commonplace and significantly increase further down the supply chain, with those further down the chain also being less likely to receive retention monies than those higher up. According to the statistics of the Insolvency Service, in 2015 the construction sector had the highest number of new company insolvencies in England and Wales in comparison with other industries. These statistics, coupled with the issues identified by the BEIS consultation, only serve to support the argument for reforming the use of retentions in the construction industry. The BEIS consultation favoured a statutory retention deposit scheme, akin to the tenancy deposit scheme that is compulsory for all residential assured shorthold tenancies. Such a scheme would ring-fence the retention and put the monies beyond

the reach of an insolvency practitioner. Such schemes already exist in other countries. For example, in New Zealand, retention money must be held on trust and in New South Wales, retention money in respect of projects over AUS $20M must be placed in a trust fund. The current position In the event that a contractor becomes insolvent, it is not necessarily the case that an employer can treat the retention monies as its own. Indeed, if the retention monies are held on trust, then the monies should remain in the trust account until the criteria for the release of the balance are satisfied. Many JCT contracts provide that the retention monies are to be held on trust and in a separate bank account. An example of this is JCT Standard Building Contract with Quantities, 2011 Edition. However, there are many other forms of building contracts which do not provide for retention monies to be held on trust and JCT contracts are often amended to remove that provision. This is where subcontractors further down the chain are exposed. The proposed reforms The text of the Aldous Bill was recently published. In its present form, the Aldous Bill: 1. Amends section 111 of the Construction Act 1996 so that any clause in a construction contract entered into after the passing of the Construction (Retention Deposit Schemes) Act 2018, which enables a payer to withhold cash retentions shall be of no effect unless the monies are deposited in a retention deposit scheme and, prior to the first withholding of the monies, the payer has notified the payee of the scheme administrator’s name and contact details and the scheme administrator 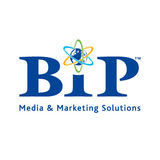