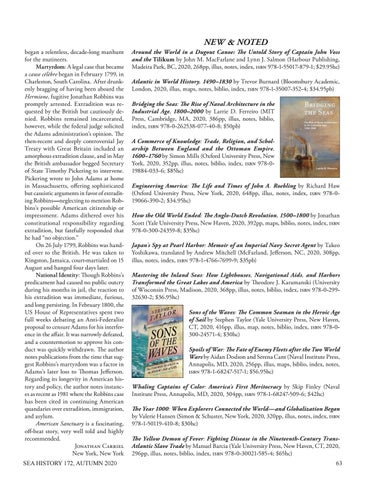 began a relentless, decade-long manhunt for the mutineers. Martyrdom: A legal case that became a cause célèbre began in February 1799, in Charleston, South Carolina. After drunkenly bragging of having been aboard the Hermione, fugitive Jonathan Robbins was promptly arrested. Extradition was requested by the British but cautiously denied. Robbins remained incarcerated, however, while the federal judge solicited the Adams administration’s opinion. The then-recent and deeply controversial Jay Treaty with Great Britain included an amorphous extradition clause, and in May the British ambassador begged Secretary of State Timothy Pickering to intervene. Pickering wrote to John Adams at home in Massachusetts, offering sophisticated but casuistic arguments in favor of extraditing Robbins—neglecting to mention Robbins’s possible American citizenship or impressment. Adams dithered over his constitutional responsibility regarding extradition, but fatefully responded that he had “no objection.” On 26 July 1799, Robbins was handed over to the British. He was taken to Kingston, Jamaica, court-martialed on 15 August and hanged four days later. National Identity: Though Robbins’s predicament had caused no public outcry during his months in jail, the reaction to his extradition was immediate, furious, and long persisting. In February 1800, the US House of Representatives spent two full weeks debating an Anti-Federalist proposal to censure Adams for his interference in the affair. It was narrowly defeated, and a countermotion to approve his conduct was quickly withdrawn. The author notes publications from the time that suggest Robbins’s martyrdom was a factor in Adams’s later loss to Thomas Jefferson. Regarding its longevity in American history and policy, the author notes instances as recent as 1981 where the Robbins case has been cited in continuing American quandaries over extradition, immigration, and asylum. American Sanctuary is a fascinating, off-beat story, very well told and highly recommended. Jonathan Carriel New York, New York