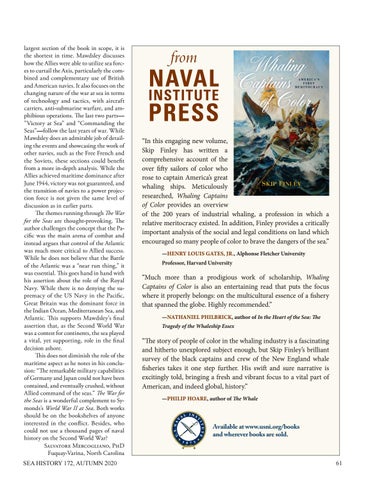 largest section of the book in scope, it is the shortest in time. Mawdsley discusses how the Allies were able to utilize sea forces to curtail the Axis, particularly the combined and complementary use of British and American navies. It also focuses on the changing nature of the war at sea in terms of technology and tactics, with aircraft carriers, anti-submarine warfare, and amphibious operations. The last two parts— ”Victory at Sea” and “Commanding the Seas”—follow the last years of war. While Mawdsley does an admirable job of detailing the events and showcasing the work of other navies, such as the Free French and the Soviets, these sections could benefit from a more in-depth analysis. While the Allies achieved maritime dominance after June 1944, victory was not guaranteed, and the transition of navies to a power projection force is not given the same level of discussion as in earlier parts. The themes running through The War for the Seas are thought-provoking. The author challenges the concept that the Pacific was the main arena of combat and instead argues that control of the Atlantic was much more critical to Allied success. While he does not believe that the Battle of the Atlantic was a “near run thing,” it was essential. This goes hand in hand with his assertion about the role of the Royal Navy. While there is no denying the supremacy of the US Navy in the Pacific, Great Britain was the dominant force in the Indian Ocean, Mediterranean Sea, and Atlantic. This supports Mawdsley’s final assertion that, as the Second World War was a contest for continents, the sea played a vital, yet supporting, role in the final decision ashore. This does not diminish the role of the maritime aspect as he notes in his conclusion: “The remarkable military capabilities of Germany and Japan could not have been contained, and eventually crushed, without Allied command of the seas.” The War for the Seas is a wonderful complement to Symonds’s World War II at Sea. Both works should be on the bookshelves of anyone interested in the conflict. Besides, who could not use a thousand pages of naval history on the Second World War? Salvatore Mercogliano, PhD Fuquay-Varina, North Carolina

“In this engaging new volume, Skip Finley has written a comprehensive account of the over fifty sailors of color who rose to captain America’s great whaling ships. Meticulously researched, Whaling Captains of Color provides an overview of the 200 years of industrial whaling, a profession in which a relative meritocracy existed. In addition, Finley provides a critically important analysis of the social and legal conditions on land which encouraged so many people of color to brave the dangers of the sea.” —HENRY LOUIS GATES, JR., Alphonse Fletcher University Professor, Harvard University

“Much more than a prodigious work of scholarship, Whaling Captains of Color is also an entertaining read that puts the focus where it properly belongs: on the multicultural essence of a fishery that spanned the globe. Highly recommended.” —NATHANIEL PHILBRICK, author of In the Heart of the Sea: The Tragedy of the Whaleship Essex

“The story of people of color in the whaling industry is a fascinating and hitherto unexplored subject enough, but Skip Finley’s brilliant survey of the black captains and crew of the New England whale fisheries takes it one step further. His swift and sure narrative is excitingly told, bringing a fresh and vibrant focus to a vital part of American, and indeed global, history.” —PHILIP HOARE, author of The Whale

Available at www.usni.org/books and wherever books are sold.