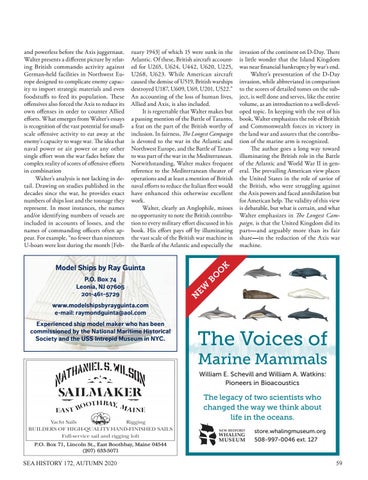 and powerless before the Axis juggernaut. Walter presents a different picture by relating British commando activity against German-held facilities in Northwest Europe designed to complicate enemy capacity to import strategic materials and even foodstuffs to feed its population. These offensives also forced the Axis to reduce its own offenses in order to counter Allied efforts. What emerges from Walter’s essays is recognition of the vast potential for smallscale offensive activity to eat away at the enemy’s capacity to wage war. The idea that naval power or air power or any other single effort won the war fades before the complex reality of scores of offensive efforts in combination Walter’s analysis is not lacking in detail. Drawing on studies published in the decades since the war, he provides exact numbers of ships lost and the tonnage they represent. In most instances, the names and/or identifying numbers of vessels are included in accounts of losses, and the names of commanding officers often appear. For example, “no fewer than nineteen U-boats were lost during the month [Feb-

ruary 1943] of which 15 were sunk in the Atlantic. Of these, British aircraft accounted for U265, U624, U442, U620, U225, U268, U623. While American aircraft caused the demise of U519, British warships destroyed U187, U609, U69, U201, U522.” An accounting of the loss of human lives, Allied and Axis, is also included. It is regrettable that Walter makes but a passing mention of the Battle of Taranto, a feat on the part of the British worthy of inclusion. In fairness, The Longest Campaign is devoted to the war in the Atlantic and Northwest Europe, and the Battle of Taranto was part of the war in the Mediterranean. Notwithstanding, Walter makes frequent reference to the Mediterranean theater of operations and at least a mention of British naval efforts to reduce the Italian fleet would have enhanced this otherwise excellent work. Walter, clearly an Anglophile, misses no opportunity to note the British contribution to every military effort discussed in his book. His effort pays off by illuminating the vast scale of the British war machine in the Battle of the Atlantic and especially the

invasion of the continent on D-Day. There is little wonder that the Island Kingdom was near financial bankruptcy by war’s end. Walter’s presentation of the D-Day invasion, while abbreviated in comparison to the scores of detailed tomes on the subject, is well done and serves, like the entire volume, as an introduction to a well-developed topic. In keeping with the rest of his book, Walter emphasizes the role of British and Commonwealth forces in victory in the land war and assures that the contribution of the marine arm is recognized. The author goes a long way toward illuminating the British role in the Battle of the Atlantic and World War II in general. The prevailing American view places the United States in the role of savior of the British, who were struggling against the Axis powers and faced annihilation but for American help. The validity of this view is debatable, but what is certain, and what Walter emphasizes in The Longest Campaign, is that the United Kingdom did its part—and arguably more than its fair share—in the reduction of the Axis war machine.

www.modelshipsbyrayguinta.com e-mail: raymondguinta@aol.com Experienced ship model maker who has been commissioned by the National Maritime Historical Society and the USS Intrepid Museum in NYC.

The Voices of Marine Mammals William E. Schevill and William A. Watkins: Pioneers in Bioacoustics

The legacy of two scientists who changed the way we think about life in the oceans. store.whalingmuseum.org 508-997-0046 ext. 127