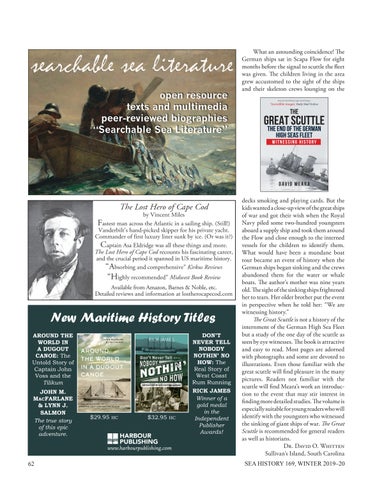 What an astounding coincidence! The German ships sat in Scapa Flow for eight months before the signal to scuttle the fleet was given. The children living in the area grew accustomed to the sight of the ships and their skeleton crews lounging on the

New Maritime History Titles AROUND THE WORLD IN A DUGOUT CANOE: The Untold Story of Captain John Voss and the Tilikum

DON’T NEVER TELL NOBODY NOTHIN’ NO HOW: The Real Story of West Coast Rum Running

RICK JAMES Winner of a gold medal in the Independent Publisher Awards!

decks smoking and playing cards. But the kids wanted a close-up view of the great ships of war and got their wish when the Royal Navy piled some two-hundred youngsters aboard a supply ship and took them around the Flow and close enough to the interned vessels for the children to identify them. What would have been a mundane boat tour became an event of history when the German ships began sinking and the crews abandoned them for the water or whale boats. The author’s mother was nine years old. The sight of the sinking ships frightened her to tears. Her older brother put the event in perspective when he told her: “We are witnessing history.” The Great Scuttle is not a history of the internment of the German High Sea Fleet but a study of the one day of the scuttle as seen by eye witnesses. The book is attractive and easy to read. Most pages are adorned with photographs and some are devoted to illustrations. Even those familiar with the great scuttle will find pleasure in the many pictures. Readers not familiar with the scuttle will find Meara’s work an introduction to the event that may stir interest in finding more detailed studies. The volume is especially suitable for young readers who will identify with the youngsters who witnessed the sinking of giant ships of war. The Great Scuttle is recommended for general readers as well as historians. Dr. David O. Whitten Sullivan’s Island, South Carolina SEA HISTORY 169, WINTER 2019–20