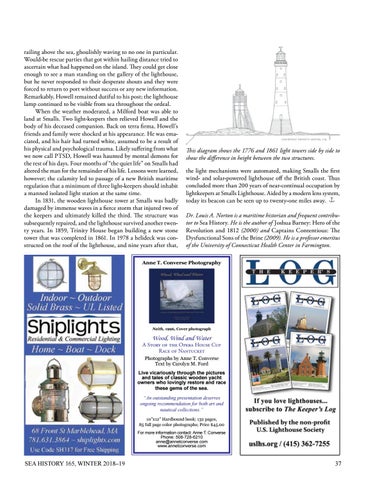 railing above the sea, ghoulishly waving to no one in particular. Would-be rescue parties that got within hailing distance tried to ascertain what had happened on the island. They could get close enough to see a man standing on the gallery of the lighthouse, but he never responded to their desperate shouts and they were forced to return to port without success or any new information. Remarkably, Howell remained dutiful to his post; the lighthouse lamp continued to be visible from sea throughout the ordeal. When the weather moderated, a Milford boat was able to land at Smalls. Two light-keepers then relieved Howell and the body of his deceased companion. Back on terra firma, Howell’s friends and family were shocked at his appearance. He was emaciated, and his hair had turned white, assumed to be a result of his physical and psychological trauma. Likely suffering from what we now call PTSD, Howell was haunted by mental demons for the rest of his days. Four months of “the quiet life” on Smalls had altered the man for the remainder of his life. Lessons were learned, however; the calamity led to passage of a new British maritime regulation that a minimum of three light-keepers should inhabit a manned isolated light station at the same time. In 1831, the wooden lighthouse tower at Smalls was badly damaged by immense waves in a fierce storm that injured two of the keepers and ultimately killed the third. The structure was subsequently repaired, and the lighthouse survived another twenty years. In 1859, Trinity House began building a new stone tower that was completed in 1861. In 1978 a helideck was constructed on the roof of the lighthouse, and nine years after that,

This diagram shows the 1776 and 1861 light towers side by side to show the difference in height between the two structures. the light mechanisms were automated, making Smalls the first wind- and solar-powered lighthouse off the British coast. Thus concluded more than 200 years of near-continual occupation by lightkeepers at Smalls Lighthouse. Aided by a modern lens system, today its beacon can be seen up to twenty-one miles away. Dr. Louis A. Norton is a maritime historian and frequent contributor to Sea History. He is the author of Joshua Barney: Hero of the Revolution and 1812 (2000) and Captains Contentious: The Dysfunctional Sons of the Brine (2009). He is a professor emeritus of the University of Connecticut Health Center in Farmington.