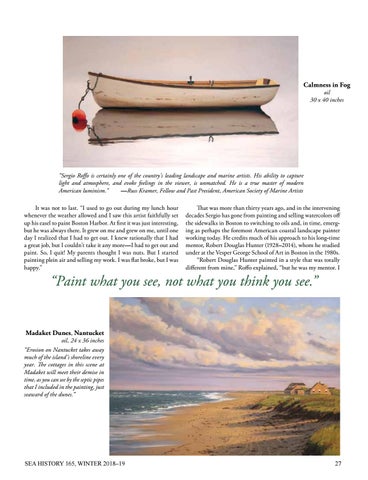 “Sergio Roffo is certainly one of the country’s leading landscape and marine artists. His ability to capture light and atmosphere, and evoke feelings in the viewer, is unmatched. He is a true master of modern —Russ Kramer, Fellow and Past President, American Society of Marine Artists American luminism.” It was not to last. “I used to go out during my lunch hour whenever the weather allowed and I saw this artist faithfully set up his easel to paint Boston Harbor. At first it was just interesting, but he was always there. It grew on me and grew on me, until one day I realized that I had to get out. I knew rationally that I had a great job, but I couldn’t take it any more—I had to get out and paint. So, I quit! My parents thought I was nuts. But I started painting plein air and selling my work. I was flat broke, but I was happy.”

That was more than thirty years ago, and in the intervening decades Sergio has gone from painting and selling watercolors off the sidewalks in Boston to switching to oils and, in time, emerging as perhaps the foremost American coastal landscape painter working today. He credits much of his approach to his long-time mentor, Robert Douglas Hunter (1928–2014), whom he studied under at the Vesper George School of Art in Boston in the 1980s. “Robert Douglas Hunter painted in a style that was totally different from mine,” Roffo explained, “but he was my mentor. I

“Paint what you see, not what you think you see.”

oil, 24 x 36 inches “Erosion on Nantucket takes away much of the island’s shoreline every year. The cottages in this scene at Madaket will meet their demise in time, as you can see by the septic pipes that I included in the painting, just seaward of the dunes.”