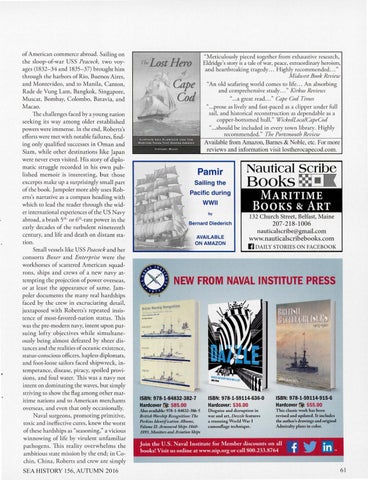 of American commerce abroad. Sailing on the sloop-of-war USS Peacock, two voyages (1832-34 and 1835-37) brought him through the harbors of Rio, Buenos Aires, and Montevideo, and to Manila, Canton , Rade de Yung Lam, Bangkok, Singapore, Muscat, Bombay, Colombo, Batavia, and Macao. The challenges faced by a young nation seeking its way among older established powers were immense. In the end, Roberrs&#39;s efforts were met with notable failures, finding only qualified successes in Oman and Siam, while other destinations like Japan were never even visited. His story of diplomatic struggle recorded in his own published m emoir is interes ting, but those excerpts m ake up a surprisingly sm all part of the book. Jam poler more ably uses Roberts&#39;s narrative as a compass heading with which to lead the reader through the wider international experiences of the US Navy abroad, a brash 5ch- or 6&#39;h-rate power in the early decades of the turbulent nineteenth century, and life and death on distant station. Small vessels like USS Peacock and her consorts Boxer and Enterprise were the workhorses of scattered American squadrons, ships and crews of a new navy attempting the projection of power overseas, or at least the appearance of same. Jampoler documents the many real hardships faced by the crew in excruciating detail, juxtaposed with Roberrs&#39;s repeated insistence of most-favored-nation status. This was the pre-modern navy, intent upon pursuing lofty objectives while simultaneously being almost defeated by sheer distances and the realities of oceanic ex istence, status-conscious officers, hapless diplomats, and foot-loose sai lors faced shipwreck, intemperance, disease, piracy, spoiled provisions, and foul water. This was a navy not intent on dominating the waves, but simply striving to show the flag among other maritime nations and to American merchants overseas, and even that only occasionally. Naval surgeons, promoting primitive, toxic and ineffective cures, knew the worst of these hardships as &quot;seasoning,&quot; a vicious winnowing of life by virulent unfa miliar pathogens. This reality overwhelms the ambitious state mission by the end; in Cochin, C hina, Roberts and crew a re simply

D isguise and disruption in war and art, Dazzle features

This classic work h as been revised and updated. It includes the author&#39;s drawings and original Admiralty plans in color.