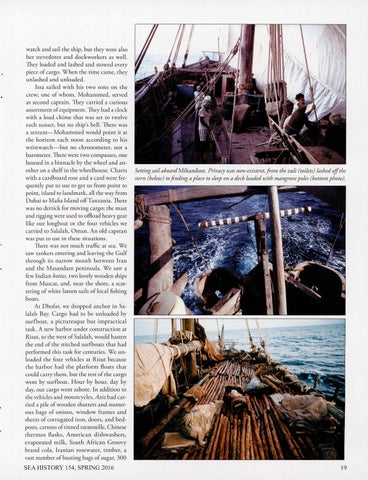 watch and sail the ship, but they were also her stevedores and dockworkers as well. They loaded and lashed and stowed every piece of ca rgo. When the time came, they unlashed and unloaded. Issa sailed with his two sons on the crew; one of whom, Mohammed, served as second captain. They carried a curious assortment of equipment. They had a clock with a loud chime that was set to twelve each sunset, but no ship&#39;s bell. TI1ere was a sextant-Mohammed would point it at th e horizon each noon according to his wristwatch-but no chronometer, nor a barometer. There were two compasses, one housed in a binnacle by the wheel and another on a shelf in the wheelhouse. C harts with a cardboard rose and a card were frequently put to use to get us from point to point, island to landmark, all the way from Dubai to Mafia Island offTanzania. There was no derrick for moving cargo; the mast and rigging were used to offioad heavy gear like our longboat or the four vehicles we carried to Salalah, Oman. An old capstan was put to use in these situations. There was not much traffic at sea. We saw tankers entering and leaving the Gulf through its narrow mouth between Iran and the Masandam peninsula. We saw a few Indian kotias, two lovely wooden ships from Muscat, and, near the shore, a scattering of white lateen sails of local fishing boats. At Dhofar, we dropped anchor in Salalah Bay. Cargo had to be unloaded by surfboat, a picturesque but impractical task. A new harbor under construction at Risut, to the west ofSalalah, would hasten the end of the stitched surfboats that had performed this task for centuries. We unloaded the four vehicles at Risut because the harbor had the platform floats that could carry them, but the rest of the cargo went by surfboat. Hour by hour, day by day, our cargo went ashore. In addition to the vehicles and motorcycles, Aziz had carried a pile of wooden shutters and numerous bags of onions, window frames and sheets of corrugated iron, doors, and bedposts, cartons of tinned ratatouille, Chinese thermos flasks , American dishwashers, evaporated milk, South African Groovy brand cola, Iranian rosewater, timber, a vast number of busting bags of sugar, 300

Setting sail aboard Mihandust. Privacy was non-existent, .from the zuli (toilets) lashed offthe stern (below) to finding a place to sleep on a deck loaded with mangrove poles (bottom photo).