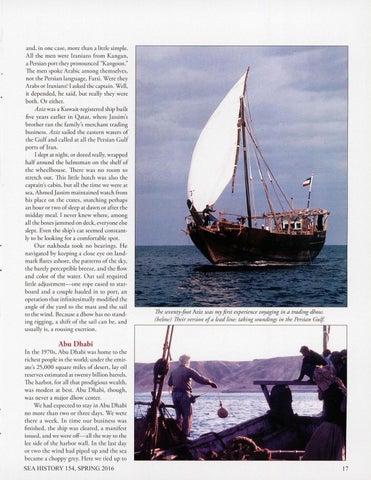 and, in one case, more than a little simple. All the men were Iranians from Kangan, a Persian port they pronounced "Kan goon." The men spoke Arabic among themselves, not the Persian language, Farsi. Were t hey Arabs or Irania ns? I asked the captain. Well, it depended, he said, but rea lly they were both. Or either. Aziz was a Kuwait-registered ship built five years earlier in Qatar, where Jassim's brother ran the fam ily's merchant trading business. Aziz sailed the eastern waters of the Gulf and called at all the Persian Gulf ports of Iran. I slept at night, or dozed really, wrapped h alf around the helmsman on the shelf of the wh eelhouse. There was no room to stretch out. This little hutch was also the captai n's cabin, but all the time we were at sea, AhmedJassim maintained watch from his place on the crates, snatching perhaps an hour or two of sleep at dawn or after the midday meal. I never knew where, among all the boxes jam med on deck, everyone else slept. Even the ship's cat seemed constantly to be looking for a comfortable spot. Our nakhoda took no bearings. He navigated by keeping a close eye on landmark flares ashore, the patterns of the sky, the barely perceptible breeze, and the flow and color of the water. Our sai l required little adjustment-one rope eased to starboard and a couple hauled in to port, an operation that infinitesimally modified the angle of the ya rd to the mast and the sail to the wind. Because a dhow has no standing rigging, a shift of the sail can be, and usually is, a rousing exertion.

The seventy-foot Aziz was my first experience voyaging in a trading dhow. (below) Their version ofa lead line: taking soundings in the Persian Gulf

Abu Dhabi In the 1970s, Abu Dhabi was home to the richest people in the world; under the emirate's 25,000 square miles of desert, lay oil reserves estimated at twenty billion barrels. The harbor, for all that prodigious wealth, was modest at best. Abu Dhabi, though, was never a major dhow center. We had expected to stay in Abu Dhabi no more than two or three days. We were there a week. In time o ur business was finished, the ship was cleared, a manifest issued, and we were off-all the way to the lee side of the harbor wall. In the last day or two the wind had piped up and the sea became a choppy grey. Here we tied up to SEA HISTORY 154, SPRING 2016