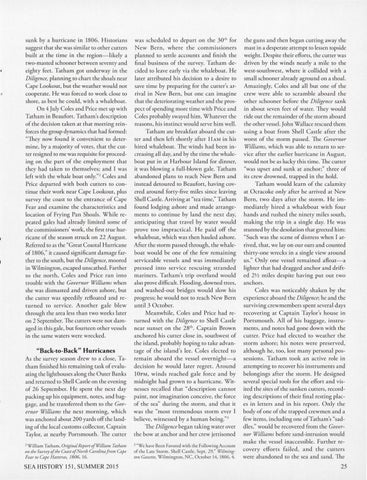 sunk by a hurricane in 1806. Historians suggest that she was similar to other cutters builr at the time in the region-likely a two-masted schooner between seventy and eighty feet. Tatham got underway in the Diligence, planning to chart the shoals near Cape Lookout, but the weather would not cooperate. H e was forced to work close to shore, as best he could, with a whaleboat. On 4 July Coles and Price met up with Tatham in Beaufort. Tatham's description of the decision taken at that meeting reinfo rces the group dynamics that had formed: "They now found it convenient to determine, by a m ajority of vo tes, that the cutter resigned to me was requisite for proceeding on the part of the employment that they had take n to themselves; a nd I was left with the whale boat only." 2 Coles and Price departed with both cutters to continue their work near Cape Lookout, plus survey the coast to the entrance of Cape Fear and examine the characteristics and location of Frying Pan Shoals. While repeated gales had already limited some of the commissioners' work, the first true hurricane of the season struck on 22 August. Referred to as the "Great Coastal Hurricane of 1806," it caused significant damage farther to the south, but the Diligence, moored in Wi lmington, escaped unscathed. Farther to the north, Coles and Price ra n into trouble with the Governor Wiffiams when she was dismasted and drive n ashore, but the cutter was speedily reflo ated a nd returned to service . Another gale blew through the area less than two weeks later on 2 September. The cutters were not damaged in this gale, but fourteen ocher vessels in the same waters were wrecked.

As the survey season drew to a close, Tatha m finished his remaining task of evaluating the lighthouses along the Outer Banks and returned to Shell Castle on the evening of 26 September. H e spent the next day packing up his equipment, notes, and baggage, and he transferred them to the Governor Wiffiams the next morning, which was ancho red about 200 ya rds off the landing of the local custom s collector, Capta in Taylor, at nearby Portsmouth. The cutter

was scheduled to depart on the 30'h for New Bern, wh ere the comm issioners planned to settle acco unts and finish the final business of the survey. Tatham decided to leave ea rly via the whaleboat. He later attributed his decision to a desire to save time by preparing for the cutter's arrival in New Bern, but one can imagine that the deteriorating weather and the prospect of spending more time with Price and Coles probably swayed him. W hatever the reasons, his instinct wo uld serve him well. Tatham ate breakfast aboa rd the cutter and then left shortly after l lAM in his hired whaleboat. The winds had been increasing all day, a nd by the time the whaleboat put in at H a rbour Island for dinner, it was blowing a full-blown gale. Tatham abandoned plans to reach New Bern and instead detoured to Beaufort, having covered around forty-five miles since leaving Shell Castle. Arriving at "tea time," Tatham found lodging ashore and made arrangements to continue by land the next day, anticipating that travel by water would prove too imprac tica l. H e paid off the whaleboat, which was then hauled ashore. After the storm passed through, the whaleboat would be one of the few remaining serviceable vessels a nd was immediately pressed into service rescuing stra nded mariners. Tatham's trip overland wo uld also prove difficulr. Flooding, downed trees, and washed-out bridges wo uld slow his progress; he would not to reach New Bern until 3 October. Meanwhile, Coles and Price had returned with the Diligence to Shell Castle near sunset on the 28'". Captain Brown anchored his cutter close in, southwest of the island, probably hoping to take advantage of the island's lee. Coles elected to remain aboard the vessel overnight-a decision he wo uld later regret. Arou nd lOPM, w inds reached gale force a nd by midnight had grow n to a hurrica ne. W itnesses recalled that "description cannot paint, nor imagination conceive, the force of the sea" during the storm, and that it was the "mos t trem endous storm ever I believe, witnessed by a human being." 3 The Diligence began taking water over the bow at anchor and her crew jettisoned

the guns and then began cutting away the mast in a desperate attempt to lessen topside weight. Despite their efforts, the cutter was driven by the winds nearly a mile to the wes t-southwest, where it collided with a small schooner already aground on a shoal. Amazingly, Coles and all but one of the crew were able to scramble aboard the other schooner before the Diligence sank in about seven feet of water. They would ride out the remainder of the storm aboard the other vessel. John Wallace rescued them using a boat from Shell Castle after the worst of the storm passed. The Governor Wi ffiams, which was able to return to service after the earlier hurricane in August, wo uld not be as lucky this time. The cutter "was upset and sunk at anchor;" three of its crew drowned, trapped in the hold. Tatham wo uld lea rn of the calamity at Ocracoke only after he arrived at New Bern, two days after the storm . H e imm ediately hired a wh aleboat with four hands and rushed the ninety miles south, making the trip in a single day. H e was stunned by the desolation that greeted him : "Such was the scene of distress when I arrived, that, we lay on our oars and counted thirty-one wrecks in a single view aro und us." Only one vessel rema ined aflo at -a lighter that had dragged anchor and drifted 2V2 miles despite h aving put out two anchors. Coles was noticeably shaken by the experience aboard the Diligence; he and the surviving crewmembers spent several days recovering at Captain Taylor's house in Portsmouth. All of his baggage, instruments, and notes had gone down with the cutter. Price had elec ted to weather the storm ashore; his notes were preserved , although he, too, lost many personal possessions. Tath am took a n ac tive role in attempting to recover his instruments and belongings after the storm. H e designed several specia l tools for the effort and visited the sites of the sunken cutters, recording descriptions of their final resting places in letters a nd in his report. Only the body of one of the trapped crewmen a nd a few items, including one ofTatham's "saddles," wo uld be recovered from the Governor Wiffiams before sand-intrusion wo uld make the vessel inaccessible. Further recovery efforts fai led , a nd the cutters were abandoned to the sea and sand . The