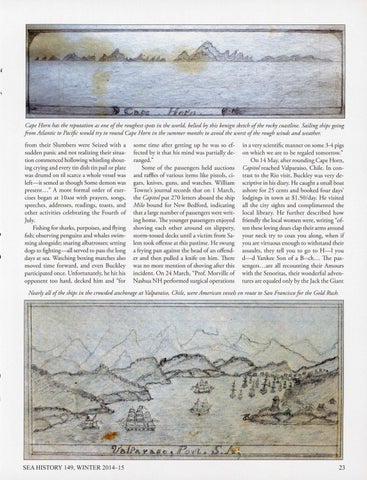 Cape Horn has the reputation as one ofthe roughest spots in the world, belied by this benign sketch ofthe rocky coastline. Sailing ships going from Atlantic to Pacific would try to round Cape Horn in the summer months to avoid the worst ofthe rough winds and weather.

from their Slumbers were Seized with a sudden panic and not realizing their situation commenced hollowing whistling shouting crying and every tin dish tin pail or plate was drumd on ti! scarce a whole vessel was left-it semed as though Some demon was present ... &quot; A more formal order of exercises began at 10AM with prayers, songs, speeches, addresses, readings, toasts, and other activities celebrating the Fourth of July. Fishing for sharks, porpoises, and flying fish; observing penguins and whales swimming alongside; snaring albatrosses; setting dogs ro fighting-all served to pass the long days at sea. Watching boxing matches also moved time forward, and even Buckley participated once. Unfortunately, he hit his opponent too hard, decked him and &quot;for

some time after getting up he was so effected by it that his mind was partially deranged.&quot; Some of the passengers held auctions and raffles of various items like pistols, cigars, knives, guns, and watches. William Towne&#39;s journal records that on 1 March, the Capitol put 270 letters aboard the ship Milo bound for New Bedford, indicating that a large number of passengers were writing home. The younger passengers enjoyed shoving each other around on slippery, storm-tossed decks until a victim from Salem took offense at this pastime. He swung a frying pan against the head of an offender and then pulled a knife on him. There was no more mention of shoving after this incident. On 24 March, &quot;Prof. Morville of Nashua NH performed surgical operations

in a very scientific manner on some 3-4 pigs on which we are to be regaled tomorrow.&quot; On 14 May, after rounding Cape Horn, Capitol reached Valparaiso, Chile. In contrast ro the Rio visit, Buckley was very descriptive in his diary. He caught a small boat ashore for 25 cents and booked four days&#39; lodgings in town at $1.50/day. He visited all the city sights and complimented the local library. He further described how friendly the local women were, writing &quot;often these loving dears clap their arms around your neck try to coax you along, when if you are virtuous enough to withstand their assaults, they tell you to go to H-1 you d-d Yankee Son of a B--ch . .. The passengers ... are all recounting their Amours with the Senoritas, their wonderful adventures are equaled only by the Jack the Giant

Nearly all ofthe ships in the crowded anchorage at Valparaiso, Chile, were American vessels en route to San Francisco for the Gold Rush.