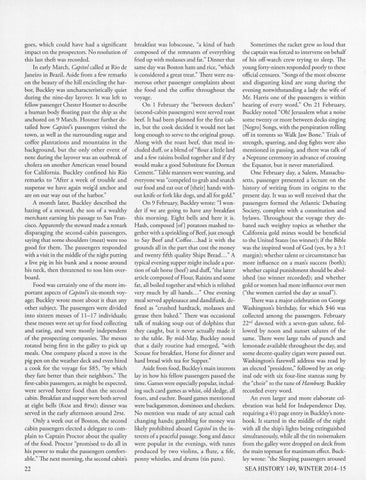 goes, which could have had a significant impact on the prospectors. No resolution of this last theft was recorded. In early March, Capitol called at Rio de Janeiro in Brazil. Aside from a few remarks on the beauty of the hill encircling the harbor, Buckley was uncharacteristically quiet during the nine-day layover. It was left to fellow passenger Chester Hosmer to describe a human body floating past the ship as she anchored on 9 March. Hosmer further detailed how Capitol&#39;s passengers visited the town, as well as the surrounding sugar and coffee plantations and mountains in the background, but the only other event of note during the layover was an outbreak of cholera on another American vessel bound for California. Buckley confined his Rio remarks to &#39;&#39;After a week of trouble and suspense we have again weig&#39;d anchor and are on our way out of the harbor.&quot; A month later, Buckley described the hazing of a steward, the son of a wealthy merchant earning his passage to San Francisco. Apparently the steward made a remark disparaging the second-cabin passengers, saying that some shoulders (meat) were too good for them. The passengers responded with a visit in the middle of the night putting a live pig in his bunk and a noose around his neck, then threatened to toss him overboard. Food was certainly one of the more important aspects of Capitol&#39;s six-month voyage; Buckley wrote more about it than any other subject. The passengers were divided into sixteen messes of 11-17 individuals; these messes were set up for food collecting and eating, and were mostly independent of the prospecting companies. The messes rotated being first in the galley to pick up meals. One company placed a stove in the pig pen on the weather deck and even hired a cook for the voyage for $85, &quot;by which they fare better than their neighbors.&quot; The first-cabin passengers, as might be expected, were served better food than the second cabin. Breakfast and supper were both served at eight bells (8AM and 8PM); dinner was served in the early afternoon around 2PM. Only a week out of Boston, the second cabin passengers elected a delegate to complain to Captain Proctor about the quality of the food. Proctor &quot;promised to do all in his power to make the passengers comfortable.&quot; The next morning, the second cabin&#39;s

breakfast was lobscouse, &quot;a kind of hash composed of the remnants of everything fried up with molasses and fat.&quot; Dinner that same day was Boston ham and rice, &quot;which is considered a great treat.&quot; There were numerous other passenger complaints about the food and the coffee throughout the voyage. On 1 February the &quot;berween deckers&quot; (second-cabin passengers) were served roast beef It had been planned for the first cabin, but the cook decided it would not last long enough to serve to the original group. Along with the roast beef, that meal included duff, or a blend of &quot;flour a little lard and a few raisins boiled together and if dry would make a good Substitute for Dornan Cement.&quot; Table manners were wanting, and everyone was &quot;compeled to grab and snatch our food and eat out of [their] hands without knife or fork like dogs, and all for gold.&quot; On 9 February, Buckley wrote: &quot;I wonder if we are going to have any breakfast this morning. Eight bells and here it is. Hash, composed [of] potatoes mashed together with a sprinkling of Beef, just enough to Say Beef and Coffee ... had it with the grounds all in the part that cost the money and rwenty fifth quality Ships Bread .. . &quot; A typical evening supper might include a portion of salt horse (beef) and duff, &quot;the latter article composed of Flour, Raisins and some fat, all boiled together and which is relished very much by all hands ... &quot; One evening meal served applesauce and dandifunk, defined as &quot;crushed hardtack, molasses and grease then baked.&quot; There was occasional talk of making soup out of dolphins that they caught, but it never actually made it to the table. By mid-May, Buckley noted that a daily routine had emerged, &quot;with Scouse for breakfast, Horse for dinner and hard bread with tea for Supper.&quot; Aside from food, Buckley&#39;s main interests lay in how his fellow passengers passed the time. Games were especially popular, including such card games as whist, old sledge, all fours, and euchre. Board games mentioned were backgammon, dominoes and checkers. No mention was made of any actual cash changing hands; gambling for money was likely prohibited aboard Capitol in the interests of a peaceful passage. Song and dance were popular in the evenings, with tunes produced by two violins, a flute, a fife, penny whistles, and drums (tin pans).

Sometimes the racket grew so loud that the captain was forced to intervene on behalf of his off-watch crew trying to sleep. The young forty-niners responded poorly to these official censures. &quot;Songs of the most obscene and disgusting kind are sung during the evening notwithstanding a lady the wife of Mr. Harris one of the passengers is within hearing of every word.&quot; On 21 February, Buckley noted &quot;Oh! Jerusalem what a noise some rwenty or more berween decks singing [Negro] Songs, with the perspiration rolling off in torrents so Walk Jaw Bone.&quot; Trials of strength, sparring, and dog fights were also mentioned in passing, and there was talk of a Neptune ceremony in advance of crossing the Equator, but it never materialized. One February day, a Salem, Massachusetts, passenger presented a lecture on the history of writing from its origins to the present day. It was so well received that the passengers formed the Atlantic Debating Society, complete with a constitution and bylaws. Throughout the voyage they debated such weighty topics as whether the California gold mines would be beneficial to the United States (no winner); if the Bible was the inspired word of God (yes, by a 3:1 margin); whether talent or circumstance has more influence on a man&#39;s success (both); whether capital punishment should be abolished (no winner recorded); and whether gold or women had more influence over men (&quot;the women carried the day as usual&quot;). There was a major celebration on George Washington&#39;s birthday, for which $46 was collected among the passengers. February 22&quot;d dawned with a seven-gun salute, followed by noon and sunset salutes of the same. There were large tubs of punch and lemonade available throughout the day, and some decent-quality cigars were passed out. Washington&#39;s farewell address was read by an elected &quot;president,&quot; followed by an original ode with six four-line stanzas sung by the &quot;choir&quot; to the tune of Hamburg. Buckley recorded every word. An even larger and more elaborate celebration was held for Independence Day, requiring a 4Y2 page entry in Buckley&#39;s notebook. It started in the middle of the night with all the ship&#39;s lights being extinguished simultaneously, while all the tin noisemakers from the galley were dropped on deck from the main topmast for maximum effect. Buckley wrote: &quot;the Sleeping passengers aroused SEA HISTORY 149, WINTER 2014- 15