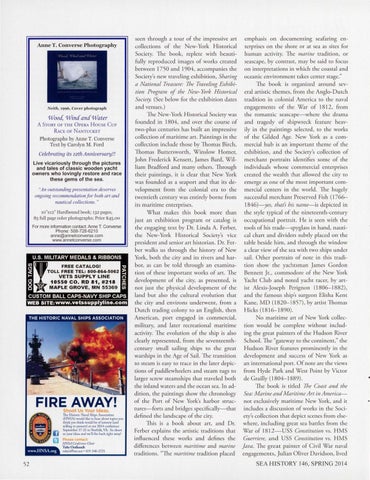 FIRE AWAY! Shoot Us Your Ideas.

us your ideas and we&#39;ll fire back right away!

seen through a to ur of the impressive art emphas is on documenting seafa ring encollections of the New-York Historical terprises on the shore or at sea as sires fo r Society. The book, replete with beauti- human ac tivity. The marine tradition, or full y reproduced images of works created seascape, by contras t, may be said to focus between 1750 and 1904, accompanies the on interpretations in which the coas tal and Society&#39;s new traveling exhibition, Sharing oceani c environ mem rakes center stage.&quot; The book is organized around seva National Treasure: The Traveling Exhibition Program of the New-York Historical eral artistic them es, from the Anglo-Dutch Society. (See below for the exhibition dates traditio n in colonial America to rhe naval and venues.) engagements of the War of 181 2, fro m The New-York Historical Society was the ro mantic seascape-where the dram a founded in 1804, and over the course of and tragedy of shipwreck feature heavtwo-plus centuries has built an impressive ily in the paintings selected, to the wo rks collection of maritime art. Paintings in the of the Gilded Age. New York as a co mcollection include chose by Thomas Birch, m ercial hub is an important them e of the Thom as Butterswo rth, Winslow Homer, exhibition , and the Society&#39;s collection of John Frederick Kensett, James Bard, Wil- m erchant portraits identifies some of the liam Bradfo rd and many others. Through individuals whose commercial enterprises their paintings, it is clear that N ew York created the wealth char allowed th e city to was fo unded as a seapo rt and char its de- emerge as one of the most important co mvelopment from the colonial era to the m ercial centers in the world. The hugely twe ntieth century was entirely borne from successful m erchant Preserved Fish (1 766its maritime enterprises . 1846)-yes, that&#39;s his name-is depi cted in What makes this book more than the style typical of the nineteenth-century just an exhibition program or catalog is occupational portrait. H e is seen with the the engaging text by Dr. Linda A. Ferber, too ls of his trade-spyglass in hand, na utirhe N ew-Yo rk Historical Society&#39;s vice cal chart and d ividers subtly placed on the president and senio r arr historian. Dr. Fer- tabl e bes ide him, and thro ugh the window ber walks us th ro ugh rhe history of New a clear view of the sea with two ships under Yo rk, bo th rhe city and its rivers and har- sail. O ther portraits of note in this tradibo r, as can be told through an examina- tio n show the yachtsman Jam es Go rdon ti o n of these important works of art. The Bennett J r., commodo re of the N ew Yo rk development of the city, as presented, is Yacht Club and noted yacht race r, by artno t just the physical development of the ist Alexis-Joseph Peri gnon (1806-1882) , land but also the cultural evo lution that and the fa mous ship&#39;s surgeon Elisha Kent the city and environs underwent, from a Kane, MD (1820- 185 7), by artist Thomas Durch trading colony to an English, then Hicks (1816-1890). N o maritime arr of N ew York collecAmerican , port engaged in commercial, military, and later recreational maritime tion would be complete without includactivity. The evolution of the ship is also ing the great painters of the H udson River clearly represented, from the seventeenth- School. The &quot;gateway to the continent,&quot; the century small sailing ships to th e great Hudson River features prominently in the wa rships in the Age of Sail. The transition development and success of New York as to steam is easy to trace in the later depic- an international po rt. O f note are the views tions of paddlewheelers and steam rugs to fro m H yde Park and Wes t Point by Victor larger screw steamships that traveled both de Grailly (1804-1889). the inland waters and the ocean sea. In adThe book is titled The Coast and the dition, the paintings show the chronology Sea: M arine and M aritime Art in Americaof rhe Port of N ew Yo rk&#39;s harbor struc- noc exclusively maritime N ew York, and it tures-forts and bridges specifically-that includes a discussion of wo rks in the Socidefin ed the landscape of rhe city. ety&#39;s collection that depict scenes from elseThis is a book about art, and Dr. where, including great sea battles from the Ferber explains rhe artistic tradi tions that War of 18 12-USS Constitution vs. HMS influenced these wo rks and defines the Guerriere, and USS Constitution vs . HMS differences between maritime and marine Java. The grea t painter of C ivil War naval traditions. &quot;The maritime tradition placed engagem ents, Julian O liver Davidson, lived