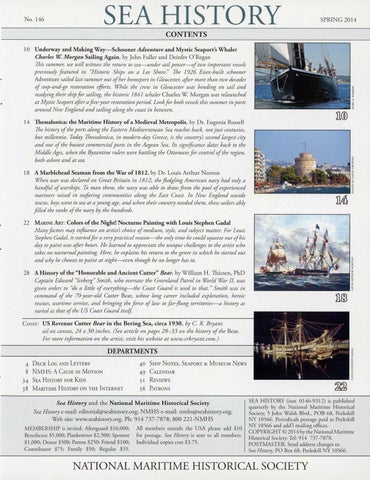 CONTENTS 10 Underway and Making Way-Schooner Adventure and Mystic Seaport&#39;s Whaler Charles W. Morgan Sailing Again, by John Fuller and Deirdre O&#39;Regan This summer, we will witness the return to sea-under sail power-of two important vessels previously featured in &quot;Historic Ships on a Lee Shore.&quot; The 1926 Essex-built schooner Adventure sailed last summer out ofher homeport in Gloucester, after more than two decades of stop-and-go restoration efforts. While the crew in Gloucester was bending on sail and readying their ship for sailing, the historic 1841 whaler Charles W Morgan was relaunched at Mystic Seaport after a jive-year restoration period. Look for both vessels this summer in ports around New England and sailing along the coast in between.

14 Thessalonica: the Maritime History of a Medieval Metropolis, by Dr. Eugenia Russell The history ofthe ports along the Eastern Mediterranean Sea reaches back, not just centuries, but millennia. Today Thessalonica, in modern-day Greece, is the country&#39;s second Largest city and one of the busiest commercial ports in the Aegean Sea. Its significance dates back to the Middle Ages, when the Byzantine rulers were battling the Ottomans for control ofthe region, both ashore and at sea. 18 A Marblehead Seaman from the War of 1812, by Dr. Louis Arthur Norto n When war was declared on Great Britain in 1812, the fledgling American navy had only a handful of warships. To man them, the navy was able to draw from the pool of experienced mariners raised in seafaring communities along the East Coast. In New England seaside towns, boys went to sea at a young age, and when their country needed them, these sailors ably filled the ranks ofthe navy by the hundreds. 22 MARINE ART: Colors of the Night! Nocturne Painting with Louis Stephen Gadal Many factors may influence an artist&#39;s choice of medium, style, and subject matter. For Louis Stephen Gadd!, it startedfar a very practical reason-the only time he could squeeze out ofhis day to paint was after hours. He learned to appreciate the unique challenges to the artist who takes on nocturnal painting. Here, he explains his return to the genre in which he started out and why he chooses to paint at night-even though he no longer has to. 28 A History of the &quot;Honorable and Ancient Cutter&quot; Bear, by W illiam H. Thiesen, PhD Captain Edward &quot;Iceberg&quot; Smith, who oversaw the Greenland Patrol in World Wtir II, was given orders to &quot;do a little of everything-the Coast Guard is used to that. &quot; Smith was in command of the 70-year-old Cutter Bear, whose long career included exploration, heroic rescues, wartime service, and bringing the farce of Law to far-flung territories-a history as varied as that ofthe US Coast Guard itself Cover: US Revenue Cutter Bear in the Bering Sea, circa 1930, by C. R. Bryant oil on canvas, 24 x 30 inches. (See article on pages 28-33 on the history of the Bear. For more information on the artist, visit his website at www.crbryant.com.)

DEPARTMENTS 4 DECK LoG AND LETTERS 8 NMHS: A CAUSE IN MOTION 34 SEA HISTORY FOR Kms 38 MARITIME HISTORY ON THE INTERNET

All members outside the USA please add $10 for postage. Sea History is sent to all members. Individual copies cost $3.75.