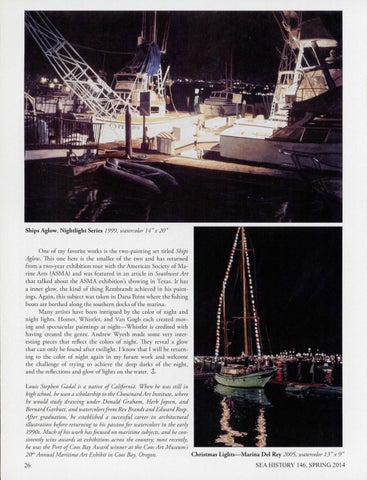 One of my favorite works is the two-painting set titled Ships Aglow. This one here is the smaller of the two and has returned from a two-year exhibition tour with the American Society of Marine Arts (ASMA) and was featured in an article in Southwest Art that talked about the ASMA exhibition&#39;s showing in Texas. Ir has a inner glow, the kind of thing Rembrandt achieved in his paintings. Again, this subject was taken in Dana Point where the fishing boats are berthed along the southern docks of the marina. Many artists have been intrigued by the color of night and night lights. Homer, Whistler, and Van Gogh each created moving and spectacular paintings at night-Whistler is credited with having created the genre. Andrew Wyeth made some very interesting pieces that reflect the colors of night. They reveal a glow that can only be found afrer twilight. I know that I will be returning to the color of night again in my future work and welcome the challenge of trying to achieve the deep darks of the night, and the reflections and glow of lights on the water. ,!,

Louis Stephen Gadal is a native of California. When he was still in high school, he won a scholarship to the Chouinard Art Institute, where he would study drawing under Donald Graham, Herb ]opsen, and Bernard Garbutt, and watercolors from Rex Brandt and Edward Reep. After graduation, he established a successful career in architectural illustration before returning to his passion for watercolors in the early 1990s. Much ofhis work has focused on maritime subjects, and he consistently wins awards at exhibitions across the country; most recently, he was the Port of Coos Bay Award winner at the Coos Art Museums 20&#39;h Annual Maritime Art Exhibit in Coos Bay, Oregon. Christmas Lights-Marina Del Rey 2005, watercolor 13 &quot;x 9&quot;