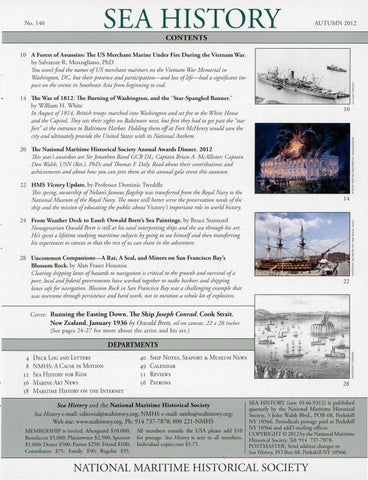 CONTENTS 10 A Forest of Assassins: The US Merchant Marine Under Fire During the Vietnam War, by Salvatore R. Mercogliano, PhD You won't find the names of US merchant mariners on the Vietnam W'tlr Memorial in W'tlshington, DC, but their presence and participation-and loss oflife-had a significant impact on the events in Southeast Asia from beginning to end. 14 The War of 1812: The Burning ofWashington, and the "Star-Spangled Banner," by Wi lliam H. Whire In August of 1814, British troops marched into W'tlshington and set fire to the White House and the Capitol. They sets their sights on Baltimore next, but first they had to get past the "star fort" at the entrance to Baltimore Harbor. Holding them offat Fort McHenry would save the city and ultimately provide the United States with its National Anthem.

20 The National Maritime Historical Society Annual Awards Dinner, 2012 This year's awardees are Sir Jo nathon Band GCB DL; Captain Brian A. McAllister; Captain Don W'tlLsh, USN (Ret.), PhD; and Thomas F Daly. Read about their contributions and achievements and about how you can join them at this annual gala event this autumn. 22 HMS Victory Update, by Professor Dominic Tweddle This spring, ownership ofNelson's famous flagship was transferred from the Royal Navy to the National Museum ofthe Royal Navy. The move will better serve the preservation needs ofthe ship and the mission ofeducating the public about Victory's important role in world history. 24 From Weather Deck to Easel: Oswald Brett's Sea Paintings, by Bruce Srannard Nonagenarian Oswald Brett is still at his easel interpreting ships and the sea through his art. He's spent a lifetime studying maritime subjects by going to sea himselfand then transferring his experiences to canvas so that the rest of us can share in the adventure. 28 Uncommon Companions-A Rat, A Seal, and Miners on San Francisco Bay's Blossom Rock, by Alan Fraser Houston Clearing shipping lanes ofhazards to navigation is critical to the growth and survival ofa port; local and federal governments have worked together to make harbors and shipping lanes safe for navigation. Blossom Rock in San Francisco Bay was a challenging example that was overcome through persistence and hard work, not to mention a whole lot ofexplosives.

8 NMHS: A CAUSE IN MOTION 32 SEA HISTORY FO R Krns

MARITIME HISTORY ON THE I NTERNET

All members outside the USA please add $10 for postage. Sea History is sent to all members. Individual copies cost $3.75.