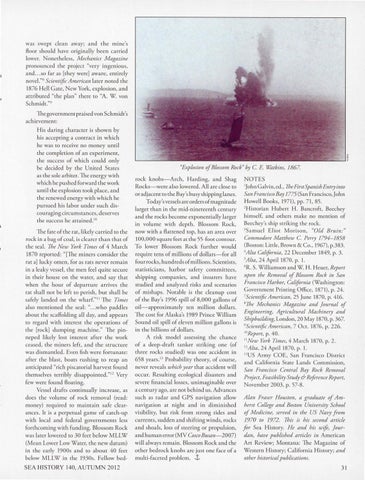 was swept clean away; and the mine's floor should h ave originally been carried lower. Nonetheless, Mechanics Magazine pronounced the project "very ingenious, and ... so far as [they were] aware, entirely novel." 8 Scientific American later noted the 1876 Hell Gate, New York, explosion, and attributed "the plan" there to "A. W. von Schmidt." 9 The government praised von Schmidt's achievement: His daring character is shown by his accepting a contract in which he was to receive no money until the completion of an experiment, the success of which could only be decided by the United States as the sole arbiter. The energy with which he pushed forward the work until the explosion took place, and the renewed energy with which he pursued his labor under such discouraging circumstances, deserves the success he attained. 10 The fate of the rat, likely carried to the rock in a bag of coal, is clearer than that of the seal. The New York Times of 4 March 1870 reported: "[The miners consider the rat a] lucky omen, for as rats never remain in a leaky vessel, the men feel quite secure in their house on the water, and say that when the hour of departure arrives the rat shall not be left to peri sh, but shall be safely landed on the wharf." 11 The Times also mentioned the seal: "... who paddles about the scaffolding all day, and appears to regard with interest the operations of the [rock] dumping machine." The pinneped likely lost interest after the work ceased, the miners left, and the structure was dismantled . Even fish were fortunate: after the blast, boats rushing to reap an anticipated "rich piscatorial harvest found themselves terribly disappointed." 12 Very few were found floating. Vessel drafts continually increase, as does the volume of rock removal (read: money) required to maintain safe clearances. It is a perperual game of catch-up with local and federal governments less forthcoming with funding. Blossom Rock was later lowered to 30 feet below MLLW (Mean Lower Low Water, the new datum) in the early 1900s and to about 40 feet below MLLW in the 1930s. Fellow bed-

"Explosion ofBlossom Rock" by C. E. Watkins, 1867. rock knobs-Arch, Harding, and Shag Rocks-were also lowered. All are close to or adjacent to the Bay's busyshippi ng lanes. Today's vessels are orders ofmagnitude larger than in the mid-nineteenth century and the rocks become exponentially larger in volume with depth. Blossom Rock, now with a flattened top, has an area over 100,000 square feet at the 55 -foot contour. To lower Blossom Rock further would require tens of millions of dollars-for all four rocks, hundreds of millions. Scientists, statisticians, harbor safety committees, shipping companies, and insurers have studied and analyzed risks and scenarios of mishaps. Notable is the cleanup cost of the Bay's 1996 spill of 8,000 gallons of oil-approximately ten million dollars. The cost for Alaska's 1989 Prince William Sound oil spill of eleven million gallons is in the billions of dollars. A risk model assessing the chance of a deep-draft tanker striking one (of three rocks studied) was one accident in 658 years. 13 Probability theory, of course, never reveals which year that accident will occur. Resulting ecological disas ters and severe financial losses, unimaginable over a century ago, are not behind us. Advances such as radar and GPS navigation allow navigation at night and in diminished visibility, but risk from strong tides and currents, sudden and shifting winds, rocks and shoals, loss of steering or propulsion, and human error (MV Cosco Busan-2007) will always remain . Blossom Rock and the other bedrock knobs are just one face of a multi-faceted problem. ,!,