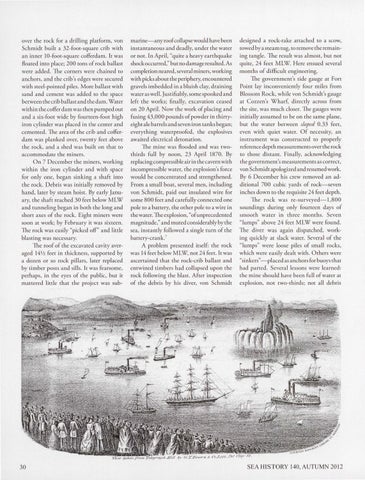 over the rock for a drilling platform, von Schmidt built a 32-foo t-square crib w ith an inner 10-foot-square cofferdam . It was floated into place; 200 tons of rock ballast were added. The corners were ch ai ned to anchors, and the crib's edges were secured with steel-pointed piles . More ballast with sa nd and cement was added to the space between the crib ballast and the dam. Water wi thin the coffer dam was then pumped out a nd a six-foot wide by fourteen-foot high iron cylinder was placed in the center and cemented. The a rea of the crib and cofferda m was pla nked over, twenty feet above the rock, and a shed was built on that to accommodate the miners. On 7 D ecember the miners, working within the iron cylinder and with space for only one, began sinking a shaft into the rock. D ebris was initially removed by hand, later by steam hoist. By early January, the shaft reached 30 feet below MLW and tunneling bega n in both the long and short axes of the rock. Eight miners were soon at wo rk; by February it was sixteen. The rock was eas ily "picked off" and little blas ting was necessary. The roof of the excavated cavity averaged 14V2 feet in thickness, supported by a dozen or so rock pillars, later replaced by timber posts and sills. Ir was fearsome , perhaps, in the eyes of the public, bur it mattered little that the project was sub-

marine- any roofcollapse would have been instantaneous and dead ly, under rhe water or not. In April, "quite a heavy earthquake shock occurred," but no damage resulted. As completion neared, several miners, working with picks about the periphery, encountered gravels imbedded in a bluish clay, draining water as well. J us ti fiably, some spooked and left the works; finally, excavation ceased on 20 April. Now the wo rk of placing and fusing 43,000 pounds of powder in rhirtyeighr ale barrels and seven iron tanks began; everything waterproofed, the explosives awaited electrical detonation. The mine was flooded and was rworhirds full by noon , 23 April 1870. By replacing compressible air in the cavern with incompressible water, the explosion's force would be concentrated and strengthened. From a small boar, several men, including von Schmidt, paid our insulated wire for some 800 feet and carefully connected one pole to a battery, the other pole to a wire in the water. The explosion, "of unprecedented magnitude," and muted considerably by the sea, instantly followed a single turn of rhe battery-crank.7 A problem presented itself: the rock was 14 feet below MLW, nor 24 feet. Ir was ascertained that the rock-crib ballast and entwined timbers had collapsed upon the rock following the blast. After inspection of the debris by his diver, von Schmidt

designed a rock-rake attached to a scow, towed bya steam tug, to remove the remaining tangle. The result was almost, bur nor quire, 24 feet MLW. Here ensued several months of difficult engineering. The government's tide gauge at Fort Point lay inconveniently fo ur miles from Blossom Rock, while von Schmidt's gauge at Cozzen 's Wharf, directly across from the sire, was much closer. The gauges were initially ass umed to be on the same plane, bur the water between sloped 0.33 feet, even wi th quiet water. Of necessity, an instrument was constructed to properly reference depth m easurements over the rock to those distant. Finally, ack nowledging the government's measurements as correct, von Schmidt apologized and resumed work. By 6 December his crew removed a n additional 700 cubic yards of rock-seven inches down to the requisite 24 feet depth. The rock was re-s urveyed-1,80 0 soundings during only fourteen days of smooth wa ter in three months. Seven "lumps" above 24 feet MLW were found. The diver was aga in dispatched, working quickly at slack water. Several of the "lumps" we re loose piles of sm all rocks, which were easily dealt w ith . Others were "sinkers" - placed as anchors for buoys that had pa rred. Several lessons were learned : the mine should h ave been full of water ar explosion, not two-thirds; nor all debris