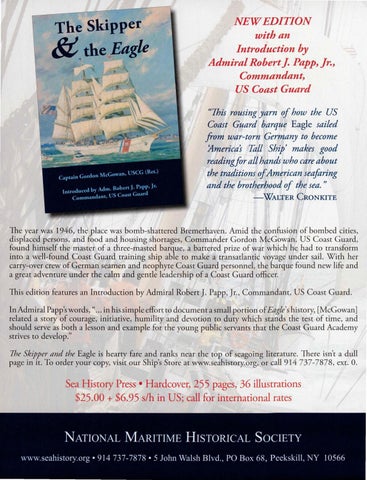 NEW EDITION with an Introduction by Admiral Robert]. Papp, Jr., Commandant, US Coast Guard "This rousing yarn of how the US Coast Guard barque Eagle sailed from war-torn Germany to become 'America's Tall Ship' makes good reading/or all hands who care about the traditions ofAmerican seafaring and the brotherhood of the sea. " -WALTER CRONKITE

The year was 1946, the place was bomb-shattered Bremerhaven. Amid the confusion of bombed cities, displaced persons, and food and housing shortages, Commander Gordon McGowan, US Coast Guard, found himself the master of a three-masted barque, a battered prize of war which he had to transform into a well-found Coast Guard training ship able to make a transatlantic voyage under sail. With her carry-over crew of German seamen and neophyte Coast Guard personnel, the barque found new life and a great adventure under the calm and gentle leadership of a Coast Guard officer. This edition features an Introduction by Admiral Robert]. Papp, Jr. , Commandant, US Coast Guard. In Admiral Pap p's words, " ... in his simple effort to document a small portion of Eagle's history, [McGowan J related a story of courage, initiative, humility and devotion to duty which stands the test of time, and should serve as both a lesson and example for the young public servants that the Coast Guard Academy strives to develop."

The Skipper and the Eagle is hearty fare and ranks near the top of seagoing literature. There isn't a dull page in it. To order your copy, visit our Ship's Store at www.seahistory.org, or call 914 737-7878, ext. 0.