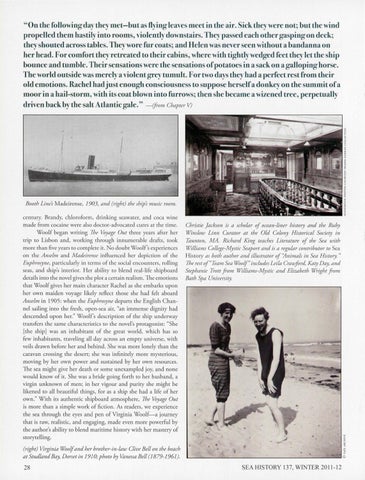 "On the following day they met-but as flying leaves meet in the air. Sick theywere not; but the wind propelled them hastily into rooms, violently downstairs. They passed each other gasping on deck; tl1eyshouted across tables. Theywore fur coats; and Helen was never seen without a bandanna on he1· head. F01· comfort they retreated to their cabins, where with tightly wedged feet they let the ship bounce and tunible. Their sensations were the sensations ofpotatoes in a sack on a galloping horse. The world outside was merely a violent greytuniult. For two days they had a perfect rest from their old emotions. Rachel had just enough consciousness to suppose herself a donkey on the summit of a moor in a hail-storm, with its coat blown into furrows; then she became a wizened tree, perpetually d1·iven back by the salt Atlantic gale." -(from Chapter V?

century. Brandy, chloroform, drinking seawater, and coca wine made from cocaine were also doctor-advocated cures at the time. Woolf began writing The Voyage Out three years after her trip to Lisbon and, working through innumerable drafts, took more than five years to complete it. No doubt Woolf's experiences on the Anselm and Madeirense influenced her depiction of the Euphrosyne, particularly in terms of the social encou nters, rolling seas, and ship's interior. H er abili ty to blend real-life shipboard details into the novel gives th e pl ot a certain realism. The emotions that Woolf gives her main character Rachel as she embarks upon her own maiden voyage likely reflect those she had felt aboard Anselm in 1905: when the Euphrosyne departs the English Channel sailing into the fresh , open-sea air, "an immense dignity had descended upon her." Woolf's description of the ship underway transfers the same characteristics to the novel's protagonist: "She [the ship] was an inhabitant of the great world, which has so few inhabitants, traveling all day across an empty universe, with veils drawn before her and behind. She was more lonely than the caravan crossing the desert; she was infinitely more mysterious, moving by her own power and sustained by her own resources. The sea might give her death or some unexampled joy, and none would know of it. She was a bride going forth to her husband, a virgin unknown of men; in her vigour and purity she might be likened to all beautiful things, for as a ship she had a life of her own." With its authentic shipboard atmosphere, The Voyage Out is more than a simple wo rk of fictio n. As readers, we experience the sea through the eyes and pen of Virginia Woolf-a journey that is raw, realistic, and engaging, m ade even more powerful by the author's ability to blend maritime history with her mastery of storytelling.

Christie Jackson is a scholar of ocean-Liner history and the Ruby Winslow Linn Curator at the Old Colony Historical Society in Taunton, MA. Richard King teaches Literature of the Sea with Wiffiams Coffege-Mystic Seaport and is a regular contributor to Sea History as both author and iffustrator of "Animals in Sea H istory. " The rest of"Team Sea Woolf" includes Leila Crawford, Katy Day, and Stephanie Trott from Wiffiams-Mystic and Elizabeth Wright from Bath Spa University.