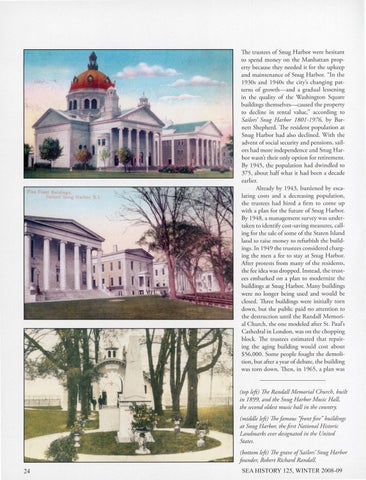 The trustees of Snug H arbor were hesitant to spend m o ney on the Manhattan property because they needed it for the upkeep and maintenance of Snug H arbor. &quot;In the 1930s and 1940s the city&#39;s changing patterns of growth-and a gradual lessening in the quali ty of the Washington Square buildings themselves-caused the property ro decline in rental value,&quot; acco rding to Sailors&#39; Snug Harbor 1801-1976, by Barnett Shepherd. The res ident population at Snug H arbor had also declined . W ith the advent of social securi ty and pensio ns, sailors had more independence and Snug H arbor wasn&#39;t th eir on ly option for retirement. By 1945, the population had dwindled to 375, about half what it had been a decade earli er. Already by 1943, burdened by escalating costs and a decreasing population, the trustees had hired a firm to com e up wit h a pl an for the future of Snug Harbor. By 1948, a managem ent survey was undertaken to id entify cost-saving meas ures, calling for the sale of some of the Staten Island land to raise money to refurbi sh the buildings. In 1949 the trustees cons idered charging the m en a fee to stay at Snug Harbor. After protests from many of the residents, the fee idea was dropped. Instead , rhe trustees embarked on a plan to modernize rhe buildings ar Snug H arbor. Many buildings we re no longer being used and wo uld be closed . 1l1ree buildings were initially torn down, but rhe public paid no attention to the destruction until the Randall Memorial C hurch, the on e modeled after Sr. Paul&#39;s Cathedral in London, was on the chopping block. The trustees estimated that repairing rhe aging building would cost about $56,000 . Some people fought rhe demoli tion, bur after a year of debate, the buildin g was torn down. Then, in 1965, a plan was