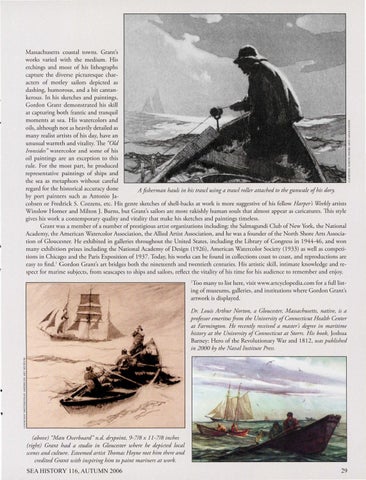 Massachusetts coastal towns. Grant's works va ried with the medium. His etchings and most of his lithographs capture the diverse picturesque characters of motley sailors depicted as dashing, humorous, and a bit cantankerous. In his sketches and paintings, Gordon G rant demonstrated his skill at capturing both frantic and tranquil moments at sea. His watercolors and oils, although not as heavily derailed as many realist artists of his day, have an unusual warmth and vitality. The "Old Ironsides" wate rcolor and some of his oil paintings are an exception to this rule. For the most part, he produced representative paintings of ships and the sea as metaphors without careful

A fisherman hauls in his trawl using a trawl roller attached to the gunwale of his dory. regard for the historical accuracy done by port painters such as Antonio Jacobsen or Fredrick S. Cozzens, etc. His genre sketches of shell-backs at work is more suggestive of his fellow Harper's Weekly artists Winslow Homer and Milton J. Burns, but Grant's sailors are more rakishly human souls that almost appear as caricatures. This style gives his work a contemporary quality and vitality that make his sketches and paintings timeless. Grant was a member of a number of prestigious artist organizations including: the Salmagundi Club of New York, the National Academy, the American Watercolor Association, the Allied Artist Association, and he was a founder of the North Shore Arts Association of Gloucester. He exhibited in galleries throughout the United States, including the Library of Congress in 1944-46, and won many exhibition prizes including the National Academy of Design (1926), American Watercolor Society (1933) as well as competitions in Chicago and the Paris Exposition of 1937. Today, his works can be found in collections coast to coast, and reproductio ns are easy to find. 1 Gordon Grant's art bridges both the nineteenth and twentieth centuries. His artistic skill, intimate knowledge and respect for m arine subj ects, from seascapes to ships and sailors, reflect the vitality of his time for his audience to remember and enjoy. 1

Too many to list here, visit www.arrcyclopedia.com for a full listing of museums, galleries, and institutions where Gordon G rant's artwork is displayed .

Dr. Louis Arthur Norton, a Gloucester, Massachusetts, native, is a professor emeritus from the University of Connecticut H ealth Center at Farmington. He recently received a master's degree in maritime history at the University of Connecticut at Storrs. His book, Joshua Barney: Hero of the Revolutionary War and 1812, was published in 2000 by the Naval Institute Press.

(a bove) "Man Overboard" n.d. drypoint, 9-718 x 11-718 inches (right) Grant had a studio in Gloucester where he depicted local scenes and culture. Esteemed artist Thomas Hoyne met him there and credited Grant with inspiring him to paint mariners at work.