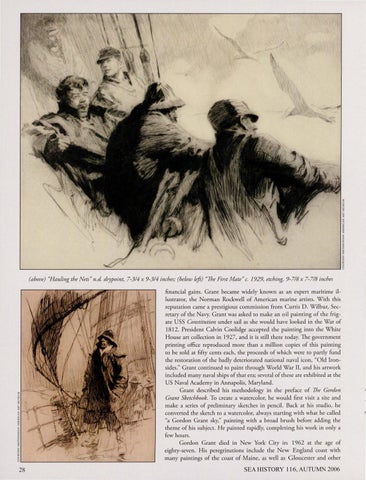 (above) "Hauling the Nets" n.d. drypoint, 7-314 x 9-314 inches; (below left) "The First Mate" c. 1929, etching, 9-718 x 7-718 inches financial gains. Grant became widely known as an expert maritime illustrator, the Norman Rockwell of American marine artists. With this reputation came a prestigious commission from Curtis D. Wilbur, Secretary of the Navy. Grant was asked to make an oil painting of the frigate USS Constitution under sail as she would have looked in the War of 1812. President Calvin Coolidge accepted rhe painting into rhe White House art collection in 1927, and ir is still rhere today. The government printing office reproduced more rhan a million copies of rhis painting to be sold ar fifty cents each, the proceeds of which were to partly fund the restoration of rhe badly deteriorated national naval icon, "Old Ironsides." Grant continued ro paint through World War II, and his arrwork included many naval ships of rhar era; several of these are exhibited ar rhe US Naval Academy in Annapolis, Maryland. Grant described his methodology in the preface of The Gordon Grant Sketchbook. To create a watercolor, he would first visit a sire and make a series of preliminary sketches in pencil. Back ar his studio, he converted rhe sketch to a watercolor, always starring with what he called "a Gordon Grant sky," painting with a broad brush before adding the theme of his subjecL He painted rapidly, completing his work in only a few hours. Gordon Gram died in New York Ciry in 1962 at the age of eighry-seven. His peregrinations include the New England coast with many paintings of rhe coast of Maine, as well as Gloucester and other