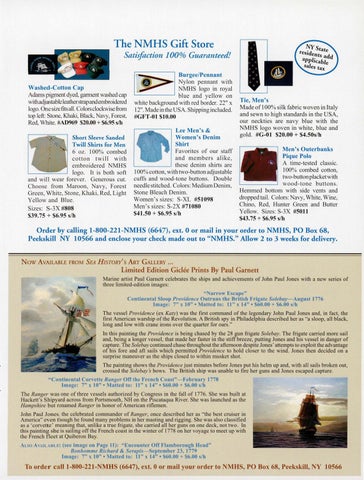 "Narrow Escape" Continental Sloop Providence Outruns the British Frigate Solebay-August J 776 Image: 7" x 10" •Matted to: 11" x 14" • $60.00 + $6.00 s/h The vessel Providence (ex Katy) was the first command of the legendary John Paul Jones and, in fact, the first American warship of the Revolution. A British spy in Philadelphia described her as "a sloop, all black, long and low with crane irons over the quarter for oars. " In this painting the Providence is being chased by the 28 gun frigate Solebay. The frigate carried more sail and, being a longer vessel, that made her faster in the stiff breeze, putting Jones and his vessel in danger of capture. The Solebay continued chase throughout the afternoon despite Jones ' attempts to exploit the advantage of his fore and aft sails which permitted Providence to bold closer to the wind. Jones then decided on a surprise maneuver as the ships closed to within musket shot. The painting shows the Providence just mjnutes before Jones put bis helm up and, with all sails broken out, crossed the Solebay's bows. The British ship was unable to fire her guns and Jones escaped capture.

"Continental Corvette Ranger Off the French Coast"-February 1778 Image: 7" x 10" •Matted to: 11" x 14" • $60.00 + $6.00 s/h The Ranger was one of three vessels authorized by Congress in the fall of 1776. She was built at Hackett's Shipyard across from Portsmouth, NH on the Piscataqua River. She was launched as the Hampshire but renamed Ranger in honor of American riflemen. John Paul Jones, the celebrated commander of Ranger, once described her as "the best cruiser in America" even though he found many problems in her masting and rigging. She was also classified as a ' corvette' meaning that, unlike a true frigate, she carried all her guns on one deck, not two. In this painting she is sailing off the French coast in the winter of 1778 on her voyage to meet up with the French fleet at Quiberon Bay. ALSO AVAILABLE: