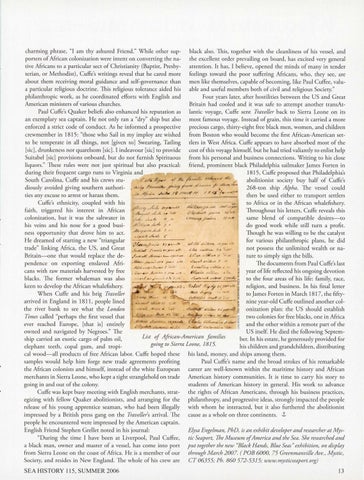 charming phrase, "I am thy ashured Friend." W hile other supblack also. This, together with the cleanliness of his vessel, and porters of African colonization were intent on converting the nathe excellent order prevailing o n board, has exci ted very general tive Afri cans to a particular sect of Christiani ty (Baptist, Presbyattention. It has, I believe, opened the minds of many in tender terian, or Methodist), C uffe's w ritings reveal that he cared m ore feelings toward the poor suffering Africans, who, they see, are about them receiving moral guidance and self-governance than m en like themselves, capable of becoming, like Paul Cuffee, valua particular religious doctrine. This religio us tolerance aided his able and useful m embers both of civil and religious Soci ety." philanth ropic work, as he coordinated efforrs with English and Fo ur years later, afrer hostilities between the US and Great American ministers of vario us chu rches. Britain had cooled and it was safe to attempt another transAtPaul Cuffe's Quaker beliefs also enhanced his reputatio n as lantic voyage, C uffe sent Traveller back to Sierra Leone on its an exemplary sea captain. H e not only ran a "dry" sh ip but also m ost famo us voyage. Instead of grai n, this time it carried a m ore enforced a strict code of conduct. As he info rmed a prospective precio us cargo, thir ty-eigh t free black m en , wom en, and children crewmember in 18 15 : "those who Sail in my imploy are wished from Bosto n who wo uld becom e the first African-American setto be temperate in all things, not [given to] Swearing, Tarl ing tl ers in Wes t Africa. Cuffe appears to have absorbed m os t of the [sic], drunkeness nor quarelsom [sic]. I indeavour [sic] to provide cost of this voyage himself, but he had tried valiantly to enlist help Sui tabel [sic] provisions onboard, but do not furni sh Spirituous from his personal and business co nnections. W riting to his close liquors." These rules were no t just spiri tual but also practical: fri end, p rominent black Philadelphia sailmaker Jam es Forren in during their freq uent cargo runs to Virginia and 18 15, Cuffe proposed that Philadelphia's caT41f'v/ "/If,, ~>n,,;;,J D//Ae.._,.,,. §A_,_ South Carolina, Cuffe and his crews Stuaboli tio nist society buy half of C uffe's d iously avoided giving southern autho ri- . VJrif J9p,,,d'<'l.r.f'"':P /"""' ~,,.,.,;,, /c-r•../.w~k 268-to n ship Alpha. The vessel could ties any excuse to arrest or harass them . /nA',t;;,,, <l't u:&.t / 'i /Vv#/c / J> /_,- (-.·~· "',.,,., then be used either to transport settlers C uffe's ethnicity, coupled with his faith, triggered his interest in African colonization, but it was the sal twater in his veins and his nose fo r a good business opportuni ty that drove him to act.