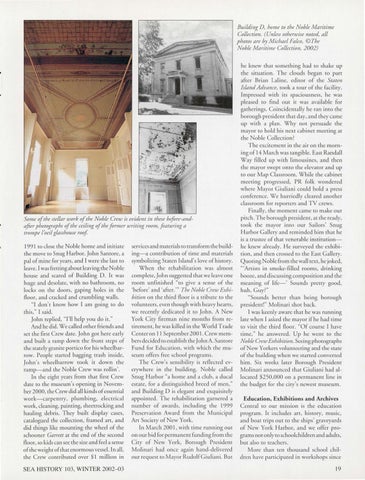 Some ofthe stellar work ofthe Noble Crew is evident in these before-andafter photographs of the ceiling ofthe former writing room, featuring a trompe f'oeil glasshouse roof 1991 to close the Noble home and initiate the move to Snug H arbor. Jo hn Santore, a pal of mine for years, and I were the last to leave. I was fretting about leaving the Noble ho use and scared of Buildin g D . Ir was huge and de olate, with no bathroom, no locks on the doo rs, gaping holes in the Aoo r, and cracked and crumbling walls. "I don 't know how I am going to do this," I sa id. John replied, "I' ll help yo u do it. " And he did. We called o ther fri ends and set the first Crew dare. John go t here early and built a ramp down the front steps of th e stately granite portico for his wheelbarrow. People started bagging trash inside, Jo hn 's wheel barrow rook it down the ramp-and rhe No ble C rew was rollin' . In rh e eight years from that first Crew date to the museum's opening in November 2000, the C rew did all kinds of essential work-ca rpentry, plumbing, electrical wo rk, cleaning, painting, sheetrocking and hauling debris. They built display cases, catalogued the collection, framed art, and did things like mounting the wheel of the schoo ner Garrett at the end of the second Aoor, so kids can see the size and feel a sense of the weight of that enormo us vessel. In all, the C rew co ntributed over $ 1 million in

services and materials to transform the building-a contributio n of rime and materials symbolizing Staten Island 's love of history. When the rehabilitatio n was almost complete, John suggested that we leave o ne roo m unfinished "ro give a sense of the ' befo re' and 'afrer. '" The Noble Crew Exhibition on the third Aoo r is a tribute to the volunteers, even tho ugh with heavy hearts, we recently dedicated it to John. A New Yo rk C ity fireman nine mo nths from retirement, he was killed in the Wo rld T rade Cen rer o n 1 I September 2001 . C rew members decided to establish the J ohn A. San to re Fund for Educa tio n, with which the museum offers free school programs. T he C rew's sensibili ty is re Aecred everywhere in rhe building. Nob le called Snug H arbo r "a home and a cl ub , a ducal estate, for a distinguished breed of men," and Building D is elegant and exquisitely appointed . The re habili tatio n garnered a number of awa rds, in cluding the 1999 Preserva ti o n Award fro m the M unicipal Art Sociery of New Yo rk. In M arch 2001 , with rime running our o n our bid fo r permanent fundin g fro m the C ity of New Yo rk, Borough President Molinari had o nce again hand -delivered our request to Mayo r Rudolf G iuliani . Bur

he knew rhar som ething had to shake up the situati o n. T he cl o uds began to part afte r Brian Lalin e, editor of the Staten Island Advance, rook a to ur of rhe faciliry. Imp ressed with its spaciousness, he was pleased to find out it was available for gatherings. Co incidentally he ran into the borough president that day, and they came up with a plan . W hy nor persuade the mayo r to hold his nex t cabinet meeting at the No bl e Collecti o n? T he excitement in the air on the m orning o f 14 M arch was tangible. East Randall W ay fill ed up with limousin es, and then the m ayo r swept o nto the elevator and up to our Map Class room. While the cabinet meeting progressed, PR folk wondered where M ayo r G iuli ani could hold a press co nference. We hurri edl y cleared another classroo m fo r reporters and TV crews . Fi nally, the mom ent came to make o ur pitch. T he borough president, at the ready, rook the mayo r in to o ur Sail o rs' Snug H arbor Gallery and reminded him that he is a trustee of that ve nerable instirurio nhe knew al ready. H e surveyed the exhibition, and then crossed to the Eas t Gallery. Q uo ringNo ble from the wall text, he joked, '"Artists in smoke-fill ed rooms, drinking booze, and discuss ing compositi on and the meaning of life-' Sounds pre rry good, huh , G uy?" "So unds better than being borough presid ent! " Molinari shot back. I was keenly aware that he was running late when I asked the mayor ifhe had rime to visit the third Aoor. "Of course I have rim e," he answered . Up he we nt to the Noble Crew Exhibition. Seeing ph otographs of New Yorkers volunteering and the state of rhe building when we started co nve rted him . Six weeks later Borough President Moli na ri announced that G iuliani had allocated $250,000 o n a perm anent line in th e budget fo r the city's newest museum .

Education, Exhibitions and Archives Central to our missio n is rh e educati o n program. Ir includes arr, history, music, and boat trips out to the ships' graveya rds of New York H arbor, and we offer programs noronly to schoolchildren and ad ulrs, but also to teachers. Mo re than te n th ousand schoo l chil dren have parri cipared in wo rkshops since