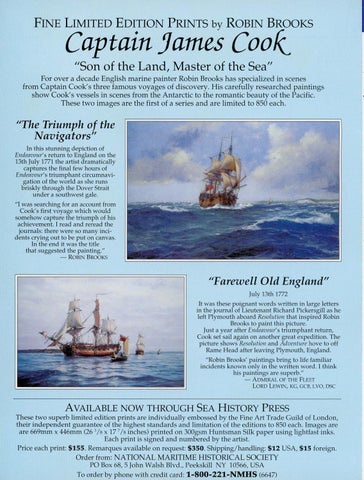 Captain James Coot &quot;Son of the Land, Master of the Sea&quot; For over a decade English marine painter Robin Brooks has specialized in scenes from Captain Cook&#39;s three famous voyages of discovery. His carefully researched paintings show Cook&#39;s vessels in scenes from the Antarctic to the romantic beauty of the Pacific. These two images are the first of a series and are limited to 850 each.

&quot;The Triumph of the Navigators&quot; In this stunning depiction of Endeavour&#39;s return to England on the 13th July 1771 the artist dramatically captures the final few hours of Endeavour&#39;s triumphant circumnavigation of the world as she runs briskly through the Dover Strait under a southwest gale. &quot;I was searching for an account from Cook&#39;s first voyage which would somehow capture the triumph of his achievement. I read and reread the journals: there were so many incidents crying out to be put on canvas. In the end it was the title that suggested the painting.&quot; -

&quot;Farewell Old England&quot; July 13th 1772 It was these poignant words written in large letters in the journal of Lieutenant Richard Pickersgill as he left Plymouth aboard Resolution that inspired Robin Brooks to paint this picture. Just a year after Endeavour&#39;s triumphant return, Cook set sail again on another great expedition. The picture shows Resolution and Adventure hove to off Rame Head after leaving Plymouth, England.

&quot;Robin Brooks&#39; paintings bring to life familiar incidents known only in the written word. I think his paintings are superb.&quot; -