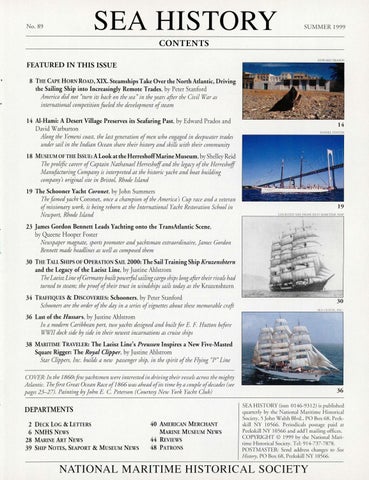 America did not "turn its back on the sea" in the years after the Civil War as international competition fueled the development ofsteam 14 Al-Hami: A Desert Village Preserves its Seafaring Past, by Edward Prados and

David Warburton Along the Yemeni coast, the last generation of men who engaged in deepwater trades under sail in the Indian Ocean share their history and skills with their community

18 MUSEUMOF THE ISSUE: A Look at the HerreshoffMarine Museum, by Shelley Reid

The famed yacht Coronet, once a champion of the America's Cup race and a veteran of missionary work, is being reborn at the International Yacht Restoration School in Newport, Rhode Island

by Queene Hooper Foster Newspaper magnate, sports promoter and yachtsman extraordinaire, James Gordon Bennett made headlines as well as composed them 30 THETALL SHIPS OF OPERATION SAIL 2000: The Sail Training Ship Kruzenshtern and the Legacy of the Laeisz Line, by Justine Ahlstrom

The Laeisz Line ofGermany built poweiful sailing cargo ships long after their rivals had turned to steam; the proof of their trust in windships sails today as the Kruzenshtern 34 TRAFFIQUES & DISCOVERIES: Schooners, by Peter Stanford

36 Last of the Hussars , by Justine Ahlstrom

In a modern Caribbean port, two yachts designed and built for E. F. Hutton before WWII dock side by side in their newest incarnations as cruise ships 38 MARITIME TRAVELER: The Laeisz Line's Preussen Inspires a New Five-Masted Square Rigger: The Royal Clipper, by Justine Ah lstrom Star Clippers, Inc. builds a new passenger ship, in the spirit of the Flying "P" Line COVER: In the 1860sfew yachtsmen were interested in driving their vessels across the mighty Atlantic. The first Great Ocean Race of1866 was ahead ofits time by a couple ofdecades (see pages 23-27). Painting by j ohn E. C. Peterson (Courtesy New York Yacht Club)