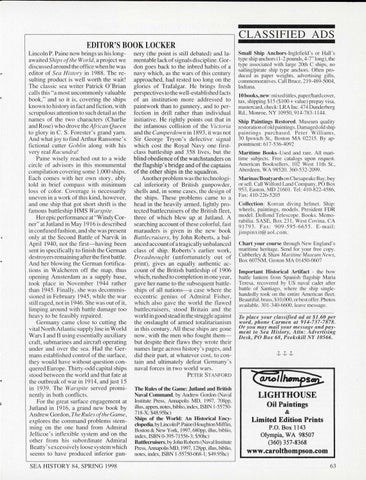 CLASSIFIED ADS EDITOR&#39;S BOOK LOCKER Llncoln P. Paine now brings us his longawaited Ships of the World, a project we discussed around the office when he was editor of Sea History in 1988. The resulting product is well worth the wa it! The classic sea writer Patri ck O&#39;Brian calls this &quot; a most uncommonly valuable book,&quot; and so it is, covering the ships known to hi story in fact and fiction , with scrupulous attention to such detail as the names of the two characters (Charlie and Rose) who drove theAfi&#39;ican Queen to glory in C. S. Forester&#39;s grand yarn. And what joy to find Arthur Ran some&#39; s fictional cutter Goblin along with his very real Racundra! Paine wisely reached out to a wide circle of advisors in this monumental compilation covering some 1,000 ships. Each comes with her own story , ably told in brief compass with minimum loss of color. Coverage is necessarily uneven in a work of this kind, however, and one ship that got short shrift is the famous battleship HMS Warspite. Her epic performance at &quot;W indy Corner&quot; at Jutland in May 1916 is described in confused fashion, and she was present only at the Second Battle of Narvik in April 1940, not the first-having been sent in specifically to finish the German destroyers remaining after the first battle. And her blowing the German fortifications in Walcheren off the map, thus opening Amsterdam as a supply base, took place in November 1944 rather than 1945. Finally , she was decommissioned in February 1945, while the war sti ll raged, not in 1946. She was out of it, limping around with battle damage too heavy to be feasibly repaired. Ge1many came close to cutting the vital No1th Atlantic supply line in World Wars I and II using essentially auxiliary craft, submarines and aircraft operating under and over the sea. Had the Germans established control of the surface, they would have without question conquered Europe. Thirty-odd capital ships stood between the world and that fate at the outbreak of war in 1914, and just 15 in 1939. The Warspite served prominently in both conflicts. For the great surface engagement at Jutland in 1916, a grand new book by Andrew Gordon, The Rules ofthe Game, explores the command problems stemming on the one hand from Admiral Jellicoe&#39;s inflex ible system and on the other from hi s subordinate Admiral Beatty &#39; s excessively loose system which seems to have produced inferior gunSEA HISTORY 84, SPRING 1998

nery (the point is still debated) and lamentable lack of signals discipline. Gordon goes back to the inbred habits of a navy which, as the wars of this century approached, had rested too long on the glories of Trafalgar. He brings fresh perspectives to the well-established facts of an institution more addressed to paintwork than to gunnery , and to perfection in drill rather than individual initiative. He rightly points out that in the infamous collision of the Victoria and the Camperdown in 1893 , it was not Sir George Tryon &#39;s defective signal which cost the Royal Navy one firstclass battleship and 358 lives, but the blind obedience of the watchstanders on the flagship&#39;s bridge and of the captains of the other ships in the squadron. Another problem was the technolog ical inferiority of British gunpowder, shells and, in some cases, the design of the ships. These problems came to a head in the heavily armed , lightly protected battlecruisers of the British fleet, three of which blew up at Jutland . A searching account of these colorful, fast marauders is given in the new book Battlecruisers, by John Roberts, a balanced account of a tragically unbalanced class of ship. Roberts&#39;s earlier work, Dreadnought (unfortunately out of print) , gives an equally authentic account of the British battleship of 1906 which, rushed to completion in one year, gave her name to the subsequent battleships of all nations-a case where the eccentric genius of Admiral Fisher, which also gave the world the flawed battlecrui sers , stood Britain and the world in good stead in the struggle against the onslaught of armed totalitarianism in this century. All these ships are gone now , with the men who fought thembut despite their flaws they wrote their names large across history &#39;s pages , and did their part, at whatever cost, to contain and ultimately defeat Germany &#39; s naval forces in two world wars. PETER STANFORD