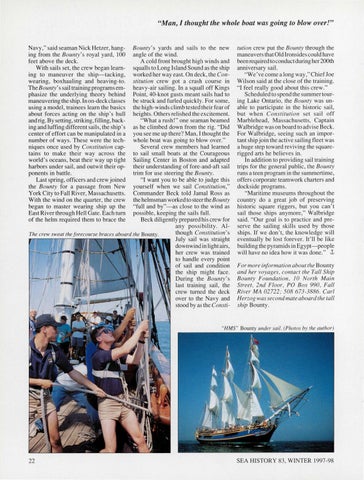 "Man, I thought the whole boat was going to blow over!"

Navy," said seaman Nick Hetzer, hanging from the Bounty's royal yard , 100 feet above the deck. With sails set, the crew began learn ing to maneuv er the ship- tacking, wearing, boxhauling and heaving-to. The Bounty 's sail training programs emphasize the underlying theory behind maneuvering the ship. In on-deck classes using a model, trainees learn the basics about forces acting on the ship 's hull and rig. By setting, striking, fi lling, backing and luffing different sails, the ship 's center of effort can be manipul ated in a number of ways. These were the techniques once used by Constitution captain s to make their way across the world 's oceans, beat their way up ti ght harbors under sail , and outwit their opponents in battle. Last spring, officers and crew joined the Bounty for a passage from New York City to Fall River, Massachusetts. With the wind on the quarter, the crew began to master wearing ship up the East River through Hell Gate. Each turn of the helm required them to brace the

Bounty' s yards and sail s to the new angle of the wind. A cold front brought high winds and squalls to Long Island Sound as the ship worked her way east. On deck, the Constitution crew got a crash course in heavy-air sailing. In a squall off Kings Point, 40-knot gusts meant sail s had to be struck and furled quickl y. For some, the high-winds climb tested their fearof heights. Others relished the excitement. "What a rush! " one seaman beamed as he climbed down fro m the rig. "Did you see me up there? Man, I thought the whole boat was go ing to blow over. " Several crew members had learned to sail small boats at the Courageous Sailing Center in Boston and adapted their understanding of fo re-and-aft sail trim for use steering the Bounty. "I want you to be able to judge this yourself when we sail Constitution," Commander Beck told Jamal Ross as the helmsman worked to steer the Bounty "full and by"-as close to the wind as possible, keeping the sails full. Beck diligently prepared his crew for any poss ibility. Although Constitution's July sail was straight downwi nd in light airs, her crew was trained to handle every point of sail and condition the ship might face . During the Bounty's last training sail, the crew turned the deck over to the Navy and stood by as the Consti-

tution crew put the Bounty through the maneuvers that Old Ironsides could have been required to conduct during her 200th anniversary sail. "We've come a long way,"Chief Joe Wilson said at the close of the training. "I feel really good about thi s crew." Scheduled to spend the summer touring Lake Ontari o, the Bounty was unable to participate in the hi storic sai l, but when Constitution set sai l off Marblehead, Massachusetts, Captain Walbridge was on board to advise Beck. For Walbridge, seeing such an important ship join the active sai ling fleet was a huge step toward rev iving the sq uarerigged arts he believes in. In addition to prov id ing sail training trips for the general public, the Bounty runs a teen program in the summertime, offers corporate teamwork charters and dockside programs. "Maritime museums throughout the country do a great job of preserving historic square riggers, but you can 't sail those ships anymore," Walbridge said. "Our goal is to practice and preserve the sailing skills used by those ships. If we don' t, the knowledge will eventually be lost forever. It' ll be like building the pyramids in Egypt-people will have no idea how it was done. " .t For more information about the Bounty and her voyages, contact the Tall Ship Bounty Foundation, JO North Main Street, 2nd Floor, PO Box 990, Fall River MA 02722; 508 673-3886. Carl Herzog was second mate aboard the tall ship Bounty.

"HMS" Bounty under sail. (Photos by the author)