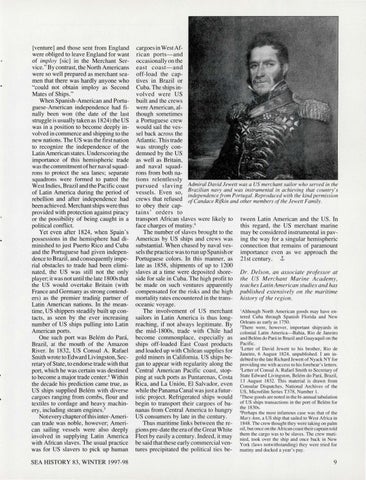 [venture] and those sent from England were obliged to leave England for want of imploy [sic] in the Merchant Service." By contrast, the North Americans were so well prepared as merchant seamen that there was hardly anyone who "could not obtain imploy as Second Mates of Ships." When Spanish-American and Portuguese-American independence had finally been won (the date of the last struggle is usually taken as 1824) the US was in a position to become deeply involved in commerce and shipping to the new nations. The US was the first nation to recognize the independence of the Latin American states. Underscoring the importance of this hemispheric trade was the commitment of her naval squadrons to protect the sea lanes; separate squadrons were formed to patrol the West Indies, Brazil and the Pacific coast of Latin America during the period of rebellion and after independence had been achieved. Merchant ships were thus provided with protection against piracy or the possibility of being caught in a political conflict. Yet even after 1824, when Spain's possession s in the hemi sphere had di mini shed to just Puerto Rico and Cuba and the Portuguese had given independence to Brazil, and consequently imperial obstacles to trade had been elimi nated, the US was still not the only player; it was not until the late 1800s that the US would overtake Britain (with France and Germany as strong contenders) as the premier trading partner of Latin American nations. In the meantime, US shippers steadily built up contacts, as seen by the ever increasing number of US ships pulling into Latin American ports. One such port was Belem do Para, Brazi l, at the mouth of the Amazon Ri ver. In 1832, US Consul A. Rafael Smith wrote to Edward Livingston , Secretary of State, to endorse trade with that port, which he was certain was destined to become a major trade center. 4 Within the decade his prediction came true, as US ships supplied Belem with diverse cargoes ranging from combs, flour and textiles to cordage and heavy machinery, including steam engines. 5 Not every chapterof this inter-American trade was noble, however; American sailing vessels were also deeply involved in suppl ying Latin America with African slaves. The usual practice was for US slavers to pick up human

cargoes in West African ports-a nd occasionally on the eas t coast -and off-load the captives in Brazil or Cuba. The ships involved were US built and the crews were American, although sometimes a Portuguese crew would sail the vessel back across the Atlantic. This trade was strongly condemned by the US as well as Britain, and naval squadrons from both nations relentlessly pursued slav in g Admiral David Jewett was a US merchant sailor who served in the vessels. Even so, Brazilian navy and was instrumental in achieving that country's independence from Portugal. Reproduced with the kind permission crews that refused of Candace Rifkin and other members of the Jewett Family. to obey their capta ins ' orders to transport African slaves were likely to tween Latin American and the US. In face charges of mutiny. 6 thi s regard, the US merchant marine The number of slaves brought to the may be considered instrumental in pavAmericas by US ships and crews was ing the way for a singular hemispheric substantial. When chased by naval ves- connection that remains of paramount sels the practice was to run up Spanish or importance even as we approach the Portuguese colors. In this manner, as 2 1st century. J, late as l 858, shipments of up to 1200 slaves at a time were deposited shore- Dr. Delson, an associate professor at side for sale in Cuba. The hi gh profit to the US Merchant Marine Academy, be made on such ventures apparently teaches Latin American studies and has compensated for the risks and the high published extensively on the maritime mortality rates encountered in the trans- history of the region. oceanic voyage. The invol vement of US merchant 'Although North American goods may have ensailors in Latin America is thus long- tered Cuba through Spanish Florida and New as early as 1750. reaching, if not always legitimate. By 2Orleans There were, however, important shipyards in the mid-1800s, trade with Chile had co lon ial Latin America- Bahia, Rio de Janeiro become commonplace, especially as and Belem do Para in Brazil and Guayaquil on the ships off-loaded East Coast products 3Pacific. Letter of David Jewett to his brother, Rio de and loaded up with Chilean supplies for Janeiro, 6 August 1824, unpublished. I am ingold miners in California. US ships be- debted to the late Richard Jewett of Nyack NY for gan to appear with regularity along the providing me with access to his forebear 's letters. Central American Pacific coast, stop- ' Letter of Consul A. Rafael Smith to Secretary of ping at such ports as Puntarenas, Costa State Edward Livingston, Belem do Para, Brazil , 13 August 1832. Thi s material is drawn from Rica, and La Union , El Salvador, even Consular Dispatches, National Archi ves of the while the Panama Canal was just a futur- US, Microfilm Series T378, Number 1. istic project. Refrigerated ships would 5These goods are noted in the bi-annual tabulation begin to transport their cargoes of ba- of US ships transactions in the port of Belem for 1830s. nanas from Central America to hungry 6the Perhaps the most infamous case was that of the US consumers by late in the century. Mary Ann, a US ship that sailed to West Africa in Thus maritime links between the re- 1848. The crew thought they were taking on palm gions pre-date the era of the Great White oil, but once on the African coast thei r captain told the cargo was to be slaves. The crew mutiFleet by easily a century. Indeed, it may them nied , took over the ship and once back in New be said that these early commercial ven- York (laws notwithstanding) they were tried for tures precipitated the political ties be- mutiny and docked a year's pay.