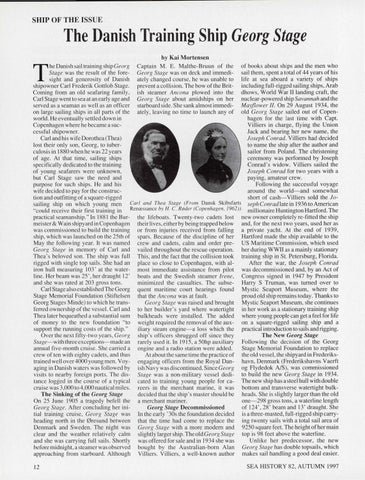 The Danish Training Ship Georg Stage by Kai Mortensen Captain M . E. Malthe-Bruun of the Georg Stage was on deck and immediately changed course, he was unable to prevent a collision. The bow of the British steamer Ancona plowed into the Georg Stage about amidsh ips on her starboard side. She sank almost immediately, leaving no time to launch any of

heDanishsailtrainingshipGeorg of books about ships and the men who Stage was the result of the foresail them, spent a total of 44 years of hi s sight and generosity of Danish life at sea aboard a variety of ships sh ipowner Carl Frederik Gottlob Stage. including full-rigged sailing sh ips, Arab Coming from an old seafaring family, dhows, World War II landing craft, the Carl Stage wentto sea at an early age and nuclear-powered ship Savannah and the served as a seaman as well as an officer Mayflower II. On 29 August 1934, the old Georg Stage sailed out of Copenon large sai ling ships in all parts of the world. He eventually settled down in hagen for the last time with Capt. Copenhagen where he became a sueVilliers in charge, flying the Union cessful shipowner. Jack and bearing her new name, the Carl and his wife Dorothea (Thea) Joseph Conrad. Villiers had decided lost their only son, Georg , to tuberto name the ship after the author and culosis in 1880 when he was 22 years sailor from Poland. The christening of age. At that time, sailing ships ceremony was performed by Joseph Conrad's widow. Villiers sailed the spec ifi ca ll y dedicated to the training of young seafarers were unknown , Joseph Conrad for two years with a but Carl Stage saw the need and paying, amateur crew. Following the successfu l voyage purpose for such ships. He and his wife decided to pay for the construearound the world-and somewhat ti on and outfitting of a square-rigged short of cash-Villiers sold the Josai ling ship on which young men Carl and Thea Stage (From Dansk Skibsfarts sephConradlatein 1936toAmerican "could receive their first training in Remessance by H. C. RÂ˘der (Copenhagen , l962 )) millionaire Huntington Hartford. The practical seamanship." In 1881 the Bur- the lifeboats. Twenty-two cadets lost new owner completely re-fitted the ship meister& Wain shipyard in Copenhagen their lives, either by being trapped below and, for the next two years, used her as was comm issioned to build the training or from injuries received from falling a private yacht. At the end of 1939, sh ip, which was launched on the 25th of spars. Because of the di scipline of her Hartford made the ship available to the May the following year. It was named crew and cadets, calm and order pre- US Maritime Commission, which used Georg Stage in memory of Carl and vailed throughout the rescue operation. her during WWII as a mainly stationary Thea' s beloved son. The ship was full This, and the fact that the collision took training ship in St. Petersburg, Florida. rigged with single top sails. She had an place so close to Copenhagen, with alAfter the war, the Joseph Conrad iron hull measuring l 03' at the water- most immediate assistance from pilot was decommissioned and, by an Act of line. Her beam was 25', her draught 12' boats and the Swedish steamer Irene, Congress signed in 1947 by President and she was rated at 203 gross tons. minimized the casualties. The subse- Harry S Truman, was turned over to Carl Stage also established The Georg quent maritime court hearings found Mystic Seaport Museum, where the Stage Memorial Foundation (Stiftelsen that the Ancona was at fault. proud old ship remains today. Thanks to Georg Stages Minde) to which he transGeorg Stage was rai sed and brought Mystic Seaport Museum, she continues ferred ownership of the vessel. Carl and to her builder's yard where watertight in her work as a stationary training ship Thea later bequeathed a substantial sum bulkheads were installed. The added where young people can get a feel for life of money to the new foundation " to weight required the removal of the aux- on a square-rigged sailing ship and a iliary steam engine-a loss which the practical introduction to sails and rigging. support the running costs of the ship." Over the next fifty-two years, Georg ship's officers shrugged off since they The New Georg Stage Stage-with three exceptions-made an rarely used it. In 1915 , a 50hp auxiliary Following the decision of the Georg Stage Memorial Foundation to replace annual five-month cruise. She carried a engine and a radio station were added. crew of ten with eighty cadets, and thus At about the same time the practice of the old vessel, the shipyard in Frederikstrained well over4000 young men . Voy- engaging officers from the Royal Dan- havn, Denmark (Frederikshavns Vaerft aging in Danish waters was followed by ish Navy was discontinued. Since Georg og Flydedok A/S), was commissioned visits to nearby foreign ports. The dis- Stage was a non-military vessel dedi- to build the new Georg Stage in 1934. tance logged in the course of a typical cated to training young people for ca- The new ship has a steel hull with double cruise was 3,000 to4,000 nautical miles . reers in the merchant marine, it was bottom and transverse watertight bulkThe Sinking of the Georg Stage decided that the ship's master should be heads. She is slightly larger than the old On 25 June 1905 a tragedy befell the a merchant mariner. one-298 gross tons , a waterline length of 124', 28' beam and 13 ' draught. She Georg Stage. After concluding her iniGeorg Stage Decommissioned tial training cruise, Georg Stage was In the early '30s the foundation decided is a three-masted, full-rigged ship carryheading north in the 0resund between that the time had come to replace the ing twenty sails with a total sail area of Denmark and Sweden. The night was Georg Stage with a more modem and 9250 square feet. The height of her main clear and the weather relatively calm slightly larger ship. The old Georg Stage top is 98 feet above the waterline. and she was carrying full sails. Shortly was offered for sale and in 1934 she was Unlike her predecessor, the new beforemidnight,asteamerwasobserved bought by the Australian-born Alan Georg Stage has double topsails, which approaching from starboard. Although Villiers. Villiers, a well-known author makes sail handling a good deal easier.