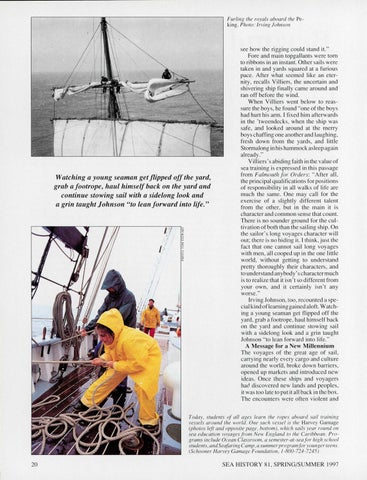 Furling the royals aboard the Peking. PholO: Ir ving Johnson

Watching a young seaman get flipped off the yard, grab a footrope, haul himself back on the yard and continue stowing sail with a sidelong look and a grin taught Johnson "to lean forward into life."

see how the ri gging could stand it. " Fore and main topgallants were tom to ribbons in an instant. Other sa il s were taken in and yards squared at a furiou s pace. After what seemed like an eternity , recalls Villiers, the uncertain and shivering ship finally came around and ran off before the wind. When Villiers went below to reassure the boys, he found "one of the boys had hurt hi s arm. I fixed him afterwards in the ' tweendecks, when the ship was safe , and looked around at the merry boys chaffing one another and laughing , fresh down from the yards, and little Stormalong in hi s hammock asleep again already." Villiers 's abiding faith in the value of sea training is ex pressed in thi s passage from Falmouth for Orders: "After all, the principal qualification s for pos itions of responsibility in all walks of life are much the same. One may call for the exercise of a slightly different talent from the other, but in the main it is character and common sense th at count. There is no sounder ground for the cultivation of both than the sailing ship . On the sailor' s long voyages character will out; there is no hiding it. I think , just the fact that one cannot sail long voyages with men , all cooped up in the one littl e world, without getting to understand pretty thoroughly their characters, and to understand anybody' s character much is to reali ze that it isn ' t so different from your own , and it certainly isn ' t any worse." Irving Johnson , too, recounted a special kind oflearninggained aloft. Watching a yo ung seaman get flipped off the yard, grab a footrope , haul himself back on the yard and continue stowing sail with a side long look and a grin taught Johnson " to lean forward into life."

A Message for a New Millennium The voyages of the great age of sail , carryin g nearly every cargo and culture around the world, broke down barriers, opened up markets and introduced new ideas. Once these ships and voyagers had di scovered new lands and peoples, it was too late to put it all back in the box. The encounters were often violent and Today, students of all ages learn the ropes aboard sail training vessels around the world. On e such vessel is the Harv ey Gamage (pho tos leji and opposite page , ho/lom) , which sails yea r round on sea education voyages from New England to the Caribbean . Programs include Ocean Classroom , a semester-at-sea fo r high school students , and Seafaring Camp, a summ erprogramforyounger teens. (Schoone r Harvey Gamage Foundation, 1-800-724-7245)