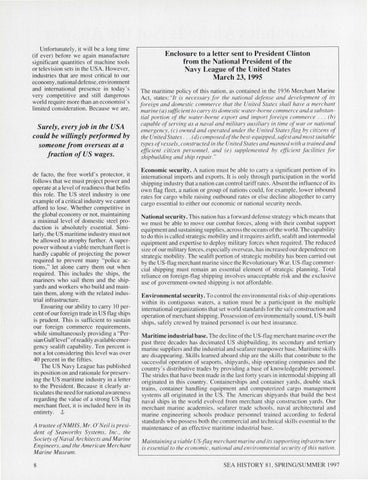 Unfo rtunately, it will be a long time (if ever) before we aga in manufacture signifi cant quantiti es of machine tool s or television sets in the USA. However, industries that are most critical to our econom y, nati onal defense, environment and international presence in today 's very competitive and still dangerous wo rld require more than an economi st's limited consideration. Because we are,

Surely, every job in the USA could be willingly performed by someone from overseas at a fraction of US wages. de facto , the free world 's protector, it follows that we must project power and operate at a level of read iness that befits this role. The US stee l industry is one example of a critical industry we cannot afford to lose. Whether competitive in the global economy or not, maintaining a minimal level of domesti c steel production is absolutely essential. Similarly, the US maritime industry must not be allowed to atroph y further. A superpower witho ut a viable merchant fleet is hardl y capable of projecting the power required to prevent many " police action s," let alone carry them out when required. This includes the ships, the mariners who sail them and the shipyards and workers who build and maintain them , along with the related industri al infrastructure. Ensuring our ability to carry 10 percent of our foreign trade in US fl ag ships is prudent. This is sufficient to sustain our fo re ign commerce requirements , wh ile simultaneously providing a " Persian Gulflevel " of readi 1y avai!able emergency sea lift capability. Ten percent is not a lot considering thi s level was over 40 percent in the fifties. The US Navy League has published its position on and ratio nale for preserving the US maritime industry in a letter to the Pres ident. Beca use it clearly articulates the need for nati onal awareness regard ing the value of a strong US flag merchant fleet, it is included here in its entirety. !,

A trustee of NMHS, Mr.O 'Neil is president of Seaworthy Systems, In c., the Society of Nava l Architects and Marine Engineers, and th e American Merchant Marine Museum.

Enclosure to a letter sent to President Clinton from the National President of the Navy League of the United States March 23, 1995 The maritime policy of thi s nati on, as contained in the 1936 Merchant Ma~ine Act, states: " ft is necessary for the national defense and development of tts fore ign and domest ic commerce that the United States shall have a merchant marine (a) sufficient to carry its domestic water-borne commerce and a substantial portion of the water-borne export and import foreign commerce ... Âˇ (b) capable of serving as a naval and military auxiliary in time o( war or nattonal emergency, (c) owned and operated under the United States flag by c1t1zens of the United States . .. (d) composed of the best-equipped, safest and most suitable types of vessels, constructed in the United Stares and manne? with a trained and efficient citizen personnel, and (e) supplemented by ejj1c1ent fac1 la1 es for shipbuilding and ship repair." Economic security. A nation must be ab le to carry a significant portion of its international imports and exports. It is on ly through participation in the wo rld shipping industry that a nation can contro l tariff rates . Absent the influence of its own flag fleet, a nation or gro up of nations could , for ex.ample, lower mbound rates for cargo while raising outbo und rates or else declme altogether to carry cargo-essential to either our econom ic or national sec uri ty needs. National security. This nation has a forward defense strategy which means that we must be able to move our combat fo rces, along with their combat support equipment and sustaining supplies, across the oceans.of.the wo rld . The capability to do this is called strateg ic mobility and it requires airlift, sea l1ft and mtermoda l equipment and ex perti se to deploy military forces when requ ired. The reduced size of our military forces, especially overseas, has increased our depende.nce on strategic mobility. The sealift portion of strategic mobility has been earn ed out by the US-fl ag merchant marine since the Revolutionary War: US-flag com mercial shipping mu st remain an essenti al e lement of strategic plannmg. T~tal reliance on fo reign-flag sh ipping involves unacceptabl e n sk and the exclusive use of government-owned shipping is not affordable. Environmental security. To control the environmental ri sks of ship operatirn1s wi thin its conti guous waters , a nation must be a partic ipant in the multipl e international organi zati ons that set world stand ards for the safe constructi on and operati on of merchant sh ipping. Possession of env iro nmental ly sound , US-b uilt ships , safely crewed by trained personne l is our best insurance. Maritime industrial base. T he dee! ine of the US-flag merchant marine over the past three decades has decimated US shi pbuil ding, its secondary a.nd terti~ry marine suppliers and the industrial and seafarer manpower base. Manti me skil Is are di sappearing. Skill s learned aboard ship are the skill s that contribute to the successfu l operation of seaports, shipyards, shi p operating compani es and the country's distributi ve trades by providing a base of howl edgeable pers?nnel. The strides that have been made in the last forty years 111111termodal sh1pp111g all ori ginated in thi s country. Containerships and conta iner yards, doubl e stack trains, container handling eq uipment and computerized cargo m.anage ment systems all orig inated in the US. The American shipyards that. build the best naval ships in the world evo lved from merchant ship const ru c t10~1 yards. O ur merchant marine academ ies, seafarer trade schoo ls, naval arc hitectura l and marine eng ineeri ng schools produce personnel trained accord in g to federal standards who possess both the commercia l and tec hni ca l sk ill s essen ti al to the maintenance of an effective maritime industrial base.