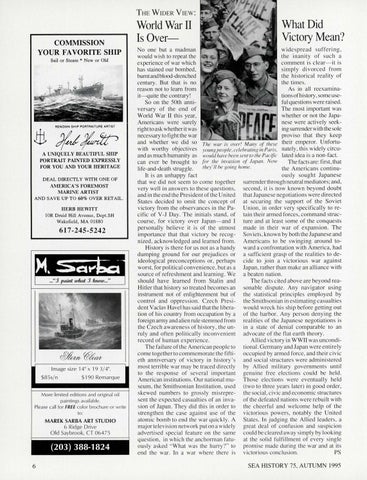 .tit J(d~ A UNIQUELY BEAUTIFUL SHIP PORTRAIT PAINTED EXPRESSLY FOR YOU AND YOUR HERITAGE DEAL DIRECTLY WITH ONE OF

AMERICA ' S FOREMOST MARINE ARTIST AND SAVE UP TO 60% OVER RETAIL.

World War II Is Over-

What Did Victory Mean?

widespread suffer in g, No one but a madman the inanity of s uch a would wish to repeat the comment is clear- it is ex perience of war which s imply divorced from has stained our bombed, the historic al reality of burnt and blood-drenched the times. century. But that is no As in all reexaminareason not to learn from tions of history, some useit-quite the contrary! ful question s were raised. So on the 50th anniThe most important was versary of the end of whether or not the JapaWorld War II this year, nese were actively seekAmericans were surely ing SUITender with the sole right to ask whether it was proviso that they keep necessary to fight the war and whether we did so Th e war is over' Many of" these their emperor. Unfortuwith worthy objectives young people, celehrating in Paris, nately, thi s widely circuand as much humanity as would have heen sent to the Pacific lated idea is a non-fact. The facts are : first , that can ever be brought to for the invasion ol Japan. Now they' II he going home. the Americans continuIife-and-death strugg le. o usly so ug ht Japanese It is an unhappy fact that we did not seem to come together surrender through neutral mediators; and, very well in answers to these questions, second, it is now known beyond doubt and in the end the President of the United that Japanese negotiation s were directed States decided to omit the concept of at securin g the support of the Soviet victory from the observances in the Pa- Union, in order very specifica ll y to recific of V-J Day. The initial s stand, of tain their armed forces, command struccourse, for v ictory over Japan-and I ture and at least some of the conq uests personally believe it is of the utmost made in their war of expansion. The importance that that victory be recog- Soviets, known by both the Japanese and Americans to be sw inging around tonized, acknowledged and learned from. History is there for us not as a handy ward a confrontation with America, had dumping ground for our prejudices or a sufficient grasp of the realities to deideological preconce ption s or, perhaps cide to join a victorious war against worst, for political convenience, but as a Japan, rather than make an alliance with source of refreshment and learning. We a beaten nation . should have learned from Stalin and The facts cited above are beyond reaHitler that history so treated becomes an sonable dispute. Any navi gator using instrument not of enlightenment but of the statistical principles employed by contro l and oppression. Czech Presi- the Smithsonian in estimatin g casua lties dent Vaclav Havel has said thatthe libera- would wreck hi s ship before getting out tion of his country from occupation by a of the harbor. Any pe rson denying the realities of the Japanese negoti ation s is foreign army and alien rule stemmed from the Czech awareness of hi story, the un- in a state of denial comparable to an rul y and often politi call y inco nve ni en t advocate of the flat earth theory. Allied victory in WWII was uncondirecord of human experi e nce. The failure of the American people to tional. Germany and Japan were e ntirely come togethe r to commemorate the fifti- occupied by armed force , and the ir civic eth anniversary of victory in hi sto ry's and soc ial structures were administered most terrible war may be traced directly by Allied military governments until to the response of severa l impo rtant genuine free e lec tion s could be held . American institution s. Our national mu- Those elections were eventua ll y held seum , the Smithsonian Institution , used (two to three years late r) in good order, skewed numbers to gross ly misrepre- the social, civic and eco nomic structures sent the ex pected casua lties of an inva- of the defeated nation s were rebui It with sion of Japan . Th ey did this in order to the cheerful and welcome help of the strengthen the case aga inst use of the victorious powers, notably the United atomic bomb to e nd the war quickly . A States. In judging the Allied leade rs, a majortelev is ion netwo rk put on a wide ly g reat deal of confusion and suspi c ion advertised spec ial feat ure on the same could be clea red away simply by looking question , in which the anchorman fatu- at the so lid fulfillment of every sing le ously asked " What was the hurry?" to promise made during the war and at its PS end the war. In a war where there is victorious conclusion . SEA HISTORY 75 , AUTUMN 1995