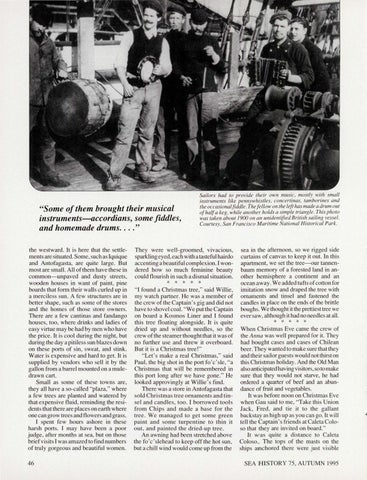 "Some of them brought their musical instruments-accordians, some fiddles, and homemade drums . ... " the westward . It is here that the settlements are situated. Some, such as Iquique and Antofagasta, are quite large. But most are small. All of them have these in common- unpaved and dusty streets, wooden houses in want of paint, pine boards that form their wall s curled up in a merciless sun . A few structures are in better shape, such as some of the stores and the homes of those store owners. There are a few cantinas and fa ndango houses, too, where drinks and ladies of easy virtue may be had by men who have the price. It is cool during the ni ght, but during the day a pitiless sun blazes down on these ports of sin , sweat, and stink. Water is expensive and hard to get. It is supplied by vendors who sell it by the gallon from a barrel mounted on a muledrawn cart. Small as some of these towns are, they all have a so-called "pl aza," where a few trees are planted and watered by that ex pensive fluid , reminding the res idents that there are places on earth where one can grow trees and fl owers and grass. I spent few hours ashore in these harsh ports. I may have been a poor judge, after months at sea, but on those brief vi sits I was amazed to find numbers of truly gorgeous and beautiful women.

Sailors had to provide their own music, mostly with small instruments like pennywhistles , concertinas, tamborines and the occasional fiddle. The fe llow on the left has made a drum out of half a keg , while another holds a simple triangle. This photo was taken about 1900 on an unidentified British sailing vessel. Courtesy, San Francisco Maritime National Historical Park.

They were well-groomed, vivacious, sparkling eyed, each with a tasteful hairdo accenting a beautiful complexion. I wondered how so much feminine beauty could flourish in such a dismal situation.

* * * * * "I fo und a Christmas tree," said Willie, my watch partner. He was a member of the crew of the Captain 's gig and did not have to shovel coa l. "We put the Captain on board a Kosmos Liner and I fo und this tree floating alongside. It is quite dried up and without needles, so the crew of the steamer thought that it was of no further use and threw it overboard . But it is a Christmas tree!" "Let's make a real Christmas," said Paul, the big shot in the port fo 'c's le, "a Christmas that will be remembered in this port long after we have gone." He looked approvingly at Willie's find . There was a store in Antofagasta that so ld Chri stmas tree orn aments and tinse l and candles, too . I borro wed tools from Chips and made a base fo r th e tree. We managed to get some green paint and some turpe ntine to thin it out, and painted th e dried-up tree. An awning had been stretched above the fo 'c'slehead to keep off the hot sun , but a chill wind would come up from the

sea in the afternoon, so we rigged side curtains of canvas to keep it out. In this apartment, we set the tree-our tannenbaum memory of a fo rested land in another he mi sphere a continent and an ocean away. We added tufts of cotton for imitation snow and draped the tree with ornaments and tinsel and fas tened the candles in place on the ends of the brittle boughs. We thought it the prettiest tree we ever saw, although it had no needles at all .

* * * * * When Christmas Eve came the crew of the Anna was well prepared fo r it. They had bought cases and cases of Chilean beer. They wanted to make sure that they and their sai lor guests would not thirst on this Christmas holiday. And the Old Man also anticipated hav ing visitors, so to make sure that they would not starve, he had ordered a quarter of beef and an abundance of fruit and vegetables. It was before noon on Chri stmas Eve when Gau said to me, "Take this Union Jack, Fred, and tie it to the gall ant backstay as high up as you can go. It wi ll tell the Captain ' s friends at Caleta Coloso that ithey are invited on board." It w1as quite a distance to Caleta Coloso .. The tops of the masts on the ships amc hored there were just visible SEA H ISTORY 75, AUTUMN 1995