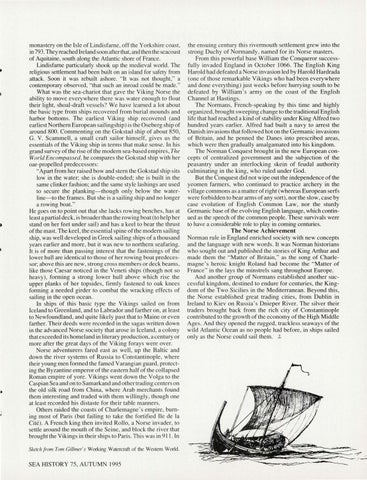 monastery on the Isle of Lindisfame, off the Yorkshire coast, in 793. They reached Ireland soon after that, and then the seacoast of Aquitaine, south along the Atlantic shore of France. Lindisfarne particularly shook up the medieval world. The religious settlement had been built on an island for safety from attack. Soon it was rebuilt ashore. "It was not thought," a contemporary observed, "that such an inroad could be made." What was the sea-chariot that gave the Viking Norse the ability to move everywhere there was water enough to float their light, shoal-draft vessels? We have learned a lot about the basic type from ships recovered from burial mounds and harbor bottoms. The earliest Viking ship recovered (and earliest Northern European sa ilingship) is the Oseberg ship of around 800. Commenting on the Gokstad ship of about 850, G. V. Scammell, a small craft sailor himself, gives us the essentials of the Viking ship in terms that make sense . In his grand survey of the ri se of the modem sea-based empires, The World Encompassed, he compares the Gokstad ship with her oar-propelled predecessors: "Apart from her raised bow and stem the Gokstad ship sits low in the water; she is double-ended; she is built in the same clinker fas hion; and the same style lashings are used to secure the planking-though on ly below the waterline-to the frames . But she is a saili ng ship and no longer a row ing boat." He goes on to point out that she lacks rowing benches, has at least a partial deck, is broaderthan the rowing boat (to help her stand on her feet under sail) and has a keel to bear the thrust of the mast. The keel , the essential spine of the modem sailing ship, was well developed in Greek sailing ships of a thousand years earlier and more, but it was new to northern seafaring. It is of more than passing interest that the fastenings of the lower hull are identical to those of her rowing boat predecessor; above this are new , strong cross members or deck beams, like those Caesar noticed in the Veneti ships (though not so heavy), form ing a strong lower hull above which rise the upper planks of her topsides, firmly fastened to oak knees forming a needed girder to combat the wracking effects of sai ling in the open ocean. In ships of this basic type the Vikings sailed on from Iceland to Greenland , and to Labrador and farther on, at least to Newfoundl and, and quite likely past that to Maine or even farther. Their deeds were recorded in the sagas written down in the advanced Norse society that arose in Iceland, a colony that exceeded its homeland in literary production, a century or more after the great days of the Viking forays were over. Norse adventurers fared east as well , up the Baltic and down the river systems of Russia to Constantinople, where their young men formed the famed Varangian guard, protecting the Byzantine emperor of the eastern half of the col lapsed Roman emp ire of yore. Vikings went down the Volga to the Caspian Sea and on to Samarkand and other trading centers on the old silk road from China, where Arab merchants found them interesting and traded with them willingly, though one at least recorded his distaste for their table manners. Others raided the coasts of Charlemagne's empire, burning most of Paris (but fai ling to take the fortified Ile de la Cite). A French king then invited Rollo, a Norse invader, to settle around the mouth of the Seine, and block the river that brought the Vikings in their ships to Paris. This was in 91 1. In

the ensuing century this rivermouth settlement g rew into the strong Duchy of Normandy, named for its Norse masters . From this powerful base William the Conqueror successfully invaded England in October I 066. The English King Harold had defeated a Norse invasion led by Harold Hardrada (one of those remarkable Vikings who had been everywhere and done everything) just weeks before hurryi ng south to be defeated by William's army on the coast of the Engli sh Channel at Hastings . The Normans, French-speaking by this time and highly organized, brought sweeping change to the traditional English life that had reached a kind of stabi lity under King Alfred two hundred years earlier. Alfred had built a navy to arrest the Danish invasions that fol lowed hot on the Germanic invasions of Britain, and he penned the Danes into prescribed areas, which were then gradually amalgamated into his kingdom. The Norman Conquest brought in the new European concepts of centralized government and the subjection of the peasantry under an interlocking skein of feudal authority culminating in the king, who ruled under God. But the Conquest did not wipe out the independence of the yeomen farmers, who continued to practice archery in the village commons as a matter of right (whereas European serfs were forbidden to bear arms of any sort), nor the slow , case by case evolution of Eng li sh Common Law, nor the sturdy Germanic base of the evolving English language, which continued as the speech of the common people. These survivals were to have a considerable role to play in coming centuries.

The Norse Achievement Norman rule in England enriched society with new concepts and the language with new words. It was Norman hi storians who sought out and pub Iished the stories of King Arthur and made them the "Matter of Britain," as the song of Charlemagne 's heroic knight Roland had become the "Matter of France" in the lays the minstrels sang throughout Europe. And another group of Normans establi shed another successful kingdom, destined to endure fo r centuries, the Kingdom of the Two Sicilies in the Mediterranean . Beyond this, the Norse established great tracling cities, from Dublin in Ireland to Kiev on Russia's Dnieper River. The silver their traders brought back from the rich city of Constantinople contributed to the growth of the economy of the High Middle Ages. And they opened the rugged, trackless seaways of the wild Atlantic Ocean as no people had before, in ships sailed only as the Norse cou ld sai l them . .t