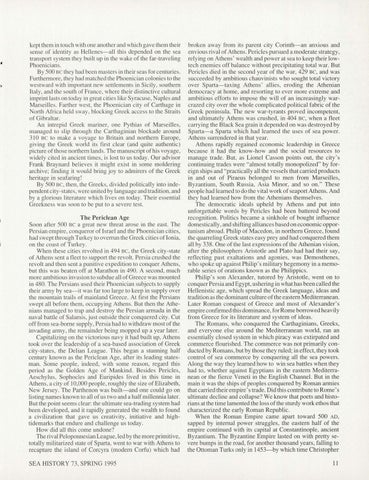 kept them in touch with one another and which gave them their sense of identity as Hell enes-all this depended on the sea transport system they built up in the wake of the far-trave ling Phoenicians. By 500 BC they had been masters in their seas for centuries. Furthe1more, they had matched the Phoenician colon ies to the westward with important new settlements in Sicily, southern Italy, and the south of France, where their distinctive cultural imprint lasts on today in great cities like Syracuse, Naples and Marseilles. Farther west, the Phoenician city of Carthage in North Africa held sway, blocking Greek access to the Straits of Gibraltar. An intrepid Greek mariner, one Pythias of Marseill es, managed to slip thrnugh the Carthaginian blockade around 310 BC to make a voyage to Britain and northern Europe, giv ing the Greek world its first clear (and quite authentic) picture of those northern lands. The manuscript of hi s voyage, widely cited in ancient times, is lost to us today. Our adv isor Frank Braynard believes it might exist in some moldering archive; finding it would bring joy to admirers of the Greek heritage in seafaring! By 500 BC, then, the Greeks, divided politically into independent city-states, were united by language and tradition, and by a glorious li terature which lives on today. Their essential Greekness was soon to be put to a severe test.

The Periclean Age Soon after 500 BC a great new threat arose in the east. The Persian empire, conqueror oflsrael and the Phoen ician cities, had swept through Turkey to overrun the Greek cities oflonia, on the coast of Turkey. When these cities revolted in 494 BC, the Greek city-state of Athens sent a fleet to support the revolt. Persia crushed the revolt and then sent a punitive expedition to conquer Athens, but this was beaten off at Marathon in 490. A second, much more ambitious invasion to subdue all of Greece was mounted in 480. The Persians used their Phoenician subjects to supply their anny by sea-it was far too large to keep in supply over the mountain trails of mainland Greece. At first the Persians swept all before them, occupying Athens. But then the Athenians managed to trap and destroy the Persian armada in the naval battle of Salamis, just outside their conquered city. Cut off from sea-borne supply, Persia had to withdraw most of the invading aimy, the remainder being mopped up a yeaiÂˇ later. Capitalizing on the victorious navy it had built up, Athens took over the leadership of a sea-based association of Greek city-states, the Delian League. This began a stunning half century known as the Periclean Age, after its leading statesman. Some people, indeed, with some reason, regard this period as the Golden Age of Mankind. Besides Pericles, Aeschylus, Sophocles and Euripides lived in this time in Athens, a city of 10,000 people, roughly the size of Elizabeth, New Jersey. The Parthenon was built-and one could go on listing names known to all of us two and a half millennia later. But the point seems clear: the ultimate sea-trading system had been developed, and it rapidly generated the wealth to found a civilization that gave us creativity, initiative and hightidemarks that endure and challenge us today . How did all this come undone? The rival Peloponnesian League, led by the more primitive, totally militarized state of Sparta, went to war with Athens to recapture the island of Corcyra (modem Corfu) which had SEA HISTORY 73, SPRING 1995

broken away from its parent city Corinth-an ai1xious and envious rival of Athens. Pericles pursued a moderate strategy , relying on Athens&#39; wealth and power at sea to keep their lowtech enem ies off balance without precipitating total war. But Pericles died in the second year of the war, 429 BC, and was succeeded by ambitious chauvinists who sought total victory over Sparta-taxing Athens&#39; allies, eroding the Athenian democracy at home, and resorting to ever more extreme and am bitious efforts to impose the will of an increasingly warcrazed city over the whole complicated political fabric of the Greek peninsula. The new war-tyrants proved incompetent, and ultimately Athens was crushed, in 404 BC, when a fleet carrying the Black Sea grain it depended on was destroyed by Sparta-a Sparta which had learned the uses of sea power. Athens surrendered in that year. Athens rapidly regained economic leadership in Greece because it had the know-how and the social resources to manage trade. But, as Lionel Casson points out, the city&#39;s continuing trades were &quot;almost totally monopolized&quot; by foreign ships and &quot;practically all the vessels that carried products in and out of Piraeus belonged to men from Marseilles, Byzantium, South Russia, Asia Minor, and so on.&quot; These people had learned to do the vital work of seaport Athens. And they had learned how from the Athenians themselves. The democratic ideals upheld by Athens and put into unforgettable words by Pericles had been battered beyond recognition. Politics became a sinkhole of bought influence domes ti call y, and shifting alliances based on economic opportunism abroad. Philip of Macedon, in northern Greece, found the quarreling Greek states easy prey and had conquered them all by 338. One of the last expressions of the Athenian vision, after the philosophers Aristotle and Plato had had their say, reflecting past exaltations and agonies, was Demosthenes, who spoke up against Philip &#39;s military hegemony in a memorable series of orations known as the Philippics. Philip&#39;s son Alexander, tutored by Aristotle, went on to conquer Persia and Egypt, ushering in what has been called the Hellenistic age, which spread the Greek language, ideas and tradition as the dominant culture of the eastern Mediterranean. Later Roman conquest of Greece and most of Alexander&#39; s empire confirmed thi s dominance, for Rome borrowed heavily from Greece for its literature and system of ideas. The Romans, who conquered the Carthaginians, Greeks, and everyone else around the Mediterranean world, ran an essentially closed system in which piracy was extirpated and commerce flourished. The commerce was not primarily conducted by Romans, but by those they ruled; in effect, they took control of sea commerce by conquering all the sea powers. Along the way they learned how to win sea battles when they had to, whether against Egyptians in the eastern Medite1Tanean or the fierce Veneti in the English Channel. But in the main it was the ships of peoples conquered by Roman armies that carried their empire&#39;s trade. Did this contribute to Rome&#39;s ultimate decline and collapse? We know that poets and historians at the time lamented the loss of the sturdy work ethos that characterized the early Roman Republic . When the Roman Empire came apart toward 500 AD, sapped by internal power struggles , the eastern half of the empire continued with its capital at Constantinople, ancient Byzantium. The Byzantine Empire lasted on with pretty severe bumps in the road, for another thousand years, falling to the Ottoman Turks only in 1453-by which time Christopher 11