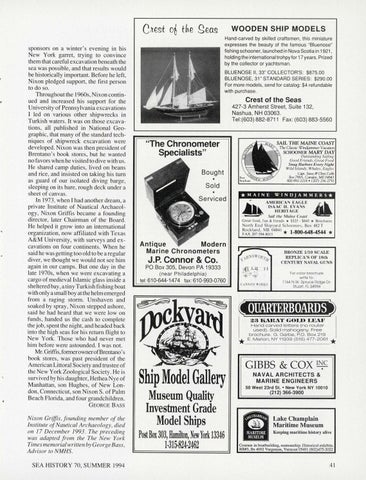 WOODEN SHIP MODELS sponsors on a winter 's evening in hi s New York garret, trying to convince them that careful excavation beneath the sea was possible, and that results would be historically important. Before he left, Nixon pledged support, the first person to do so. Throughout the 1960s, Nixon continued and increased hi s support for the University of Pennsylvania excavations I led on various other shipwrecks in Turkish waters . It was on those excavations , all published in National Geographic, that many of the standard techniques of shipwreck excavation were developed . Nixon was then pres ident of Brentano 's book stores, but he wanted no favors when he visited to di ve with us. He shared camp duties, lived on beans and rice, and insisted on taking his turn as guard of our isolated diving barge, sleeping on its bare, rough deck under a sheet of canvas. In 1973 , when I had another dream, a private Institute of Nautical Archaeology, Nixon Griffis became a founding director, later Chairman of the Board. He helped it grow into an international organization, now affi liated with Texas A&M University, with surveys and excavations on four continents. When he said he was getting too old to be a regular diver, we thought we would not see him again in our camps. But one day in the late 1970s, when we were excavating a cargo of medieval Islamic glass inside a sheltered bay, a tiny Turki sh fi shing boat with only a small boy at the helm emerged from a raging storm . Unshaven and soaked by spray, Nixon stepped ashore, said he had heard that we were low on funds, handed us the cash to complete the job, spent the night, and headed back into the high seas for his return flight to New York. Those who had never met him before were astounded. I was not. Mr. Griffis, formerownerofBrentano' s book stores, was past president of the American Littoral Society and trustee of the New York Zoological Society. He is survived by his daughter, Hethea Nye of Manhattan , son Hughes, of New London, Connecticut, son Nixon S. of Palm Beach Florida, and four grandchildren. GEORGE BASS

Nixon Griffis,founding member of the Institute of Nautical Archaeology, died on 17 December 1993 . The preceding was adapted from the The New York Times memorial written by George Bass, Advisor to NMHS. SEA HISTORY 70, SUMMER 1994

Hand-carved by skilled craftsmen , this miniature expresses the beauty of the famous "Bluenose" fishing schooner, launched in Nova Scotia in 1921 , holding the international trohpy for 17 years. Prized by the collector or yachtsman. BLUENOSE II , 33" COLLECTOR'S : $875.00 BLUENOSE, 31 " STANDARD SER IES: $290.00 For more models, send for catalog: $4 refundable with purchase.