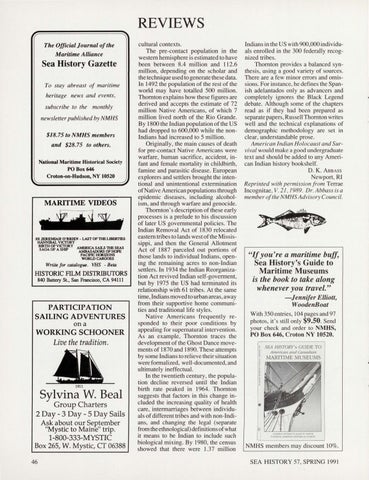 REVIEWS The Official Journal of the Maritime Alliance

cultural contexts. The pre-contact population in the western hemisphere is estimated to have been between 8.4 million and 112.6 million, depending on the scholar and the technique used to generate these data. In 1492 the population of the rest of the world may have totalled 500 million. Thornton explains how these figures are derived and accepts the estimate of 72 million Native Americans, of which 7 million lived north of the Rio Grande. By 1800 the Indian population of the US had dropped to 600,000 while the nonIndians had increased to 5 million. Originally, the main causes of death for pre-contact Native Americans were warfare, human sacrifice, accident, infant and female mortality in childbirth, famine and parasitic disease. European explorers and settlers brought the intentional and unintentional extermination of Native American populations through epidemic diseases, including alcoholism, and through warfare and genocide. Thornton &#39;s description of these early processes is a prelude to his discussion of later US governmental policies. The Indian Removal Act of 1830 relocated eastern tribes to lands west of the Mississippi, and then the General Allotment Act of 1887 parceled out portions of those lands to individual Indians, opening the remaining acres to non-Indian settlers. In 1934 the Indian Reorganization Act revived Indian self-goverment, but by 1975 the US had terminated its relationship with 61 tribes. At the same time, Indians moved to urban areas, away from their supportive home communities and traditional life styles. Native Americans frequently responded to their poor conditions by appealing for supernalural intervention. As an example, Thornton traces the development of the Ghost Dance movements of 1870 and 1890. These attempts by some Indians to relieve their situation were formalized, well-documented, and ultimately ineffectual. In the twentieth century, the population decline reversed until the Indian birth rate peaked in 1964. Thornton suggests that factors in this change included the increasing quality of health care, intermarriages between individuals of different tribes and with non-Indians, and changing the legal (separate from the ethnological) definitions of what it means to be Indian to include such biological mixing. By 1980, the census showed that there were 1.37 million

Indians in the US with 900,000 individuals enrolled in the 300 federally recognized tribes. Thornton provides a balanced synthesis, using a good variety of sources. There are a few minor errors and omissions. For instance, he defines the Spanish adelantados only as advancers and completely ignores the Black Legend debate. Although some of the chapters read as if they had been prepared as separate papers, Russell Thornton writes well and the technical explanations of demographic methodology are set in clear, understandable prose. American Indian Holocaust and Survival would make a good undergraduate text and should be added to any American Indian history bookshelf. D. K.