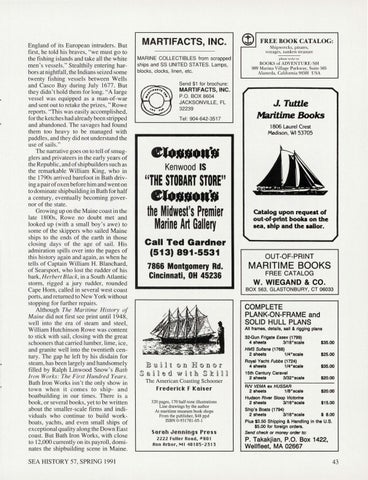 England of its European intruders. B ut first, he told his braves, &quot;we must go to the fishing islands and take all the white men&#39;s vessels.&quot; Stealthily entering harbors at nightfall, the Indians seized some twenty fishing vessels between Wells and Casco Bay during July 1677. B ut they didn&#39;t hold them for long. &quot;A large vessel was equipped as a man-of-war and sent out to retake the prizes, &quot;Rowe reports. &quot;This was easily accomplished, for the ketches had already been stripped and abandoned. The savages had found them too heavy to be managed with padd les, and they did not understand the use of sails.&quot; The narrative goes on to tell of smugglers and privateers in the early years of the Republic, and of shipbuilders such as the remarkable William King, who in the 1790s arrived barefoot in Bath driving a pair of oxen before him and went on to dominate shipbuilding in Bath for half a century, eventually becoming governor of the state. Growing up on the Maine coast in the late 1800s, Rowe no doubt met and looked up (with a small boy&#39;s awe) to some of the skippers who sailed Maine ships to the ends of the earth in those closing days of the age of sail. His admiration spills over into the pages of this history again and again, as when he tells of Captain William H. Blanchard, of Searsport, who lost the rudder of his bark, Hel&#39;.bert Black, in a South Atlantic storm, rigged a jury rudder, rounded Cape Horn, called in several west coast ports, and returned to New York without stopping for further repairs. Although The Maritime History of Maine did not first see print until 1948, well into the era of steam and steel, William Hutchinson Rowe was content to stick with sail, closing with the great schooners that carried lumber, lime, ice, and granite well into the twentieth century. The gap he left by his disdain for steam, has been largely and handsomely filled by Ralph Linwood Snow&#39;s Bath Iron Works: The First Hundred Years . Bath Iron Works isn&#39;t the only show in town when it comes to ship- and boatbui lding in our times. There is a book, or several books, yet to be written about the smaller-scale firms and individuals who continue to build workboats, yachts, and even small ships of exceptional quality along the Down East coast. But Bath Iron Works, with close to 12,000 currently on its payroll, dominates the shipbuilding scene in Maine. SEA HISTORY 57, SPRING 1991

Send check or money order to: