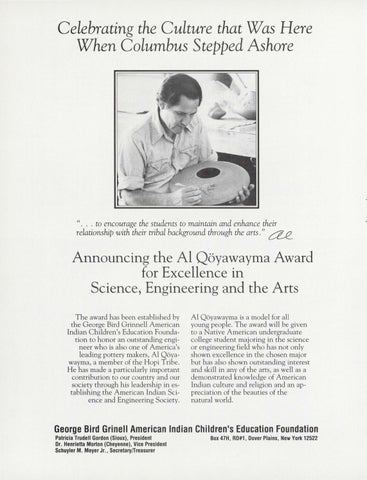 Celebrating the Culture that Was Here When Columbus Stepped Ashore

&quot;. . . to encourage the students to maintain and enhance their relationship with their tribal background through the arts.&quot; aÂŁ

Announcing the Al Qoyawayma Award for Excellence in Science, Engineering and the Arts The award has been established by the George Bird Grinnell American Indian Children&#39;s Education Foundation to honor an outstanding engineer who is also one of America&#39;s leading pottery makers, Al Qoyawayma, a member of the Hopi Tribe. He has made a particularly important contribution to our country and our society through his leadership in establishing the American Indian Science and Engineering Society.

Al Qoyawayma is a model for all young people. The award will be given to a Native American undergraduate college student majoring in the science or engineering field who has not only shown excellence in the chosen major but has also shown outstanding interest and skill in any of the arts, as well as a demonstrated knowledge of American Indian culture and religion and an appreciation of the beauties of the natural world.